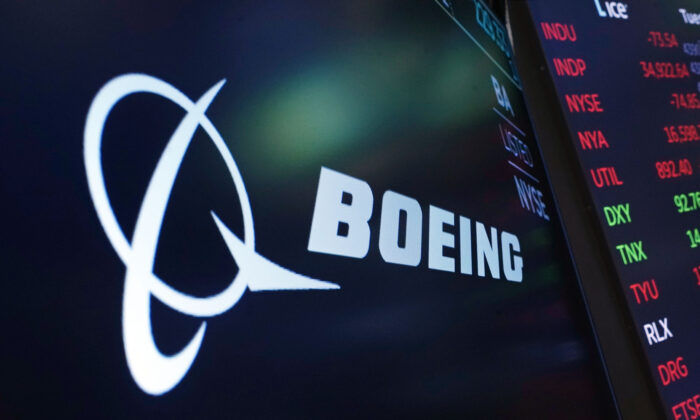 The logo for Boeing appears on a screen above a trading post on the floor of the New York Stock Exchange, N.Y., on July 13, 2021. (Richard Drew/AP Photo)
Companies

Boeing Co. said on Monday the ongoing tensions between the United States and Russia over Ukraine were creating an “adverse climate” for its business and threatening to disrupt its supply chain.

Boeing relies heavily on Russia’s VSMPO-AVISMA for the supply of titanium, a lightweight metal that is used widely in planemaking.

Russia has massed tens of thousands of troops near Ukraine’s border as it presses demands for a new security arrangement in Europe, prompting U.S. and European officials to threaten a barrage of sanctions if it invades.

The planemaker said it would monitor and evaluate for any sanctions or restrictions that might be imposed by the U.S. government and any responses from Russia that could directly affect company’s supply chain, business partners, or customers.

On Monday, U.S. President Joe Biden warned of “swift and severe consequences” from the United States and its allies if Moscow attacked Ukraine.

Western aerospace companies have shored up their stocks of titanium and are scrambling to bolster supply chains in case the metal is thrust into a potential trade war between Russia and the West.

Boeing Chief Executive David Calhoun said last week that the company is “protected for quite a while, but not forever.”

The company also flagged that it might have to consider getting additional funding, if the pace and scope of the recovery worsened.