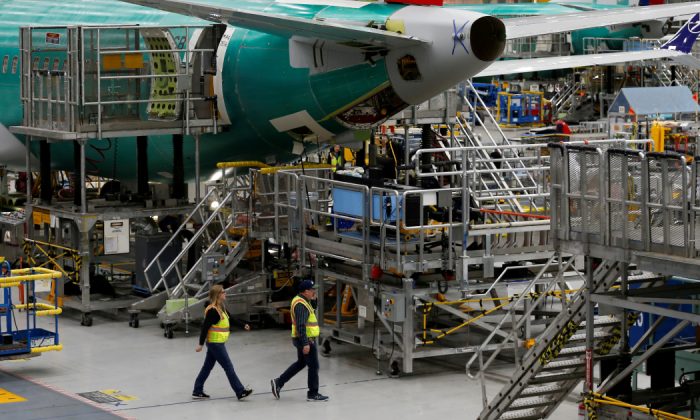 Employees walk by the end of a 737 Max aircraft at the Boeing factory in Renton, Washington, U.S., March 27, 2019. (Lindsey Wasson/Reuters)
Companies

CHICAGO—Boeing Co. said on May 5 that a Safety Review Board convened in late 2018 corroborated its prior conclusion that an angle-of-attack (AOA) sensor on the 737 MAX, which has suffered two fatal crashes, was not necessary for the safe operation of commercial aircraft.

In a statement following a series of negative news reports, Boeing provided greater detail on its recent decision to make the previously optional AOA Disagree alert a standard, standalone feature on the 737 MAX before the grounded jets return to service. The alert lights up when two sensors produce widely different readings.

The angle of attack measures the angle between the air flow and the wing and helps determine whether the plane is able to fly correctly. If the angle becomes too steep, the flow of air over the wing is disturbed, throwing the plane into an aerodynamic stall. That means it starts to fall instead of fly.

Although the angle itself is fundamental to flight, the industry has debated for years whether the information should be included in crowded cockpit displays because it is directly related to airspeed, which pilots already watch closely.

The debate over displays intensified when it emerged that Boeing had relied on a single angle-of-attack sensor to send information to a piece of anti-stall software that pushed the nose downward on Lion Air Flight 610 and Ethiopian Airlines Flight 302, which both crashed minutes after take-off, killing a total of 346 people.

Neither the angle of attack indicator nor the AOA Disagree alert are necessary for the safe operation of the airplane, Boeing reiterated on May 5.

“They provide supplemental information only, and have never been considered safety features on commercial jet transport airplanes,” Boeing said.

Still, when the MAX returns to service, all MAX production aircraft will have an activated and operable AOA Disagree alert and an optional angle of attack indicator, Boeing said.

Customers with previously delivered MAX airplanes can activate the sensor.

Boeing is also developing a software upgrade and training changes to the 737 MAX that must be approved by global regulators before the jets can fly again.

Boeing has yet to formally submit the upgrades to the U.S. Federal Aviation Administration for approval but could do as early as this week once it completes a certification test flight.

The FAA did not immediately comment on Boeing’s statement.