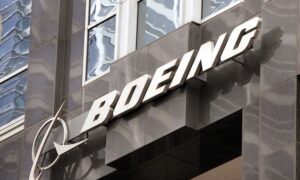 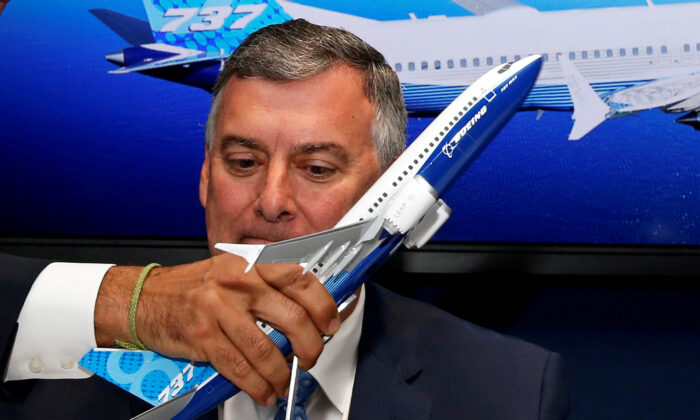 A model of a Boeing 737 MAX is held in front of Kevin McAllister, Boeing Commercial Airplanes CEO, during a commercial announcement at the 53rd International Paris Air Show at Le Bourget Airport near Paris, France, on June 18, 2019. (REUTERS/Pascal Rossignol)
US News

WASHINGTON—Boeing Co. is making progress toward getting its 737 MAX aircraft in the air again, but the U.S. Federal Aviation Administration (FAA) will need at least several more weeks for review, FAA Administrator Steve Dickson said on Oct. 22.

Boeing and the FAA are grappling to contain a crisis in the wake of two deadly 737 MAX crashes that have left 346 people dead, forced airlines to ground more than 300 aircraft, and put on hold Boeing deliveries worth more than $500 billion.

Boeing has said it hopes to resume 737 MAX flights later this year, although major U.S. and Canadian airlines have canceled MAX flights into January or February.

Dickson said at a conference of air traffic controllers in Washington that the agency had received the “final software load” and “complete system description” of revisions to the plane, which was grounded in March.

The FAA is currently using “aircraft production software” in the engineering simulator. The next step is to complete pilot workload management testing and have U.S. and international pilots conduct scenarios to determine training requirements before a key certification test flight.

“It is going to be several more weeks before we go through all of that part of the process,” Dickson said. “We’ve got considerable work to do.”

Separately, Boeing said it had successfully conducted a dry-run of a certification flight test. Dickson told Reuters in September the FAA would need about 30 days from the time of the certification test flight before the plane could resume flights.

The system description is a “500-ish page document that has the architecture of the flight control system and the changes that they have made,” Dickson told Reuters.

Boeing shares rose on Oct. 22 after two sharp days of declines following the release of instant messages on Oct. 18 from a former Boeing pilot that the company had withheld from the FAA and which raised questions about what Boeing may have known about a key safety system known as MCAS.

That prompted an immediate demand for an explanation from the FAA about why the messages weren’t turned over sooner.

Boeing stated on Oct. 22 it had “made significant progress over the past several months” in its work to return the MAX to service.

The changes include an MCAS software update with new safeguards for an anti-stall system at the heart of the two fatal crashes.

Dickson said once the steps were completed ahead of the certification test flight, “it is a fairly straightforward process to unground the airplane.” He reiterated he wouldn’t let the 737 MAX fly again “until I am satisfied it is the safest thing out there.”

Boeing chief executive Dennis Muilenburg will appear before Congress on Oct. 30. He was stripped of his title as board chairman earlier in October.

On Oct. 23, Indonesia plans to share with victims’ families a final report into Lion Air flight 610 that crashed into the Java Sea shortly after take-off from Jakarta on Oct. 29, 2018, killing all 189 people on board. The report on the 737 MAX crash is expected to be made public later this week.

The MAX was grounded after a second crash, on March 10, involving Ethiopian Airlines flight 302, which killed 157.