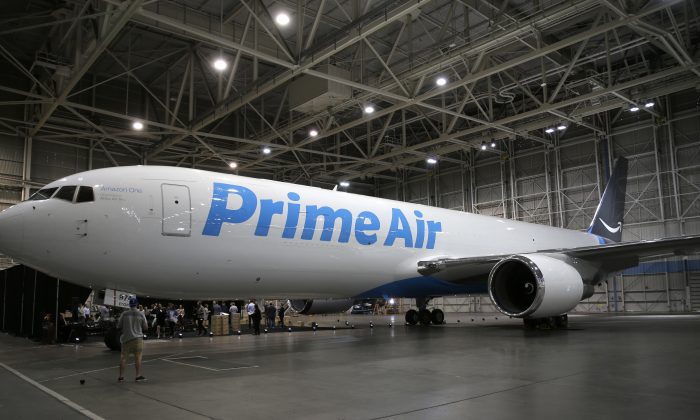 A Boeing 767, an Amazon.com "Prime Air" cargo plane is parked on display in a Boeing hangar in Seattle, on Aug. 4. (Ted S. Warren/AP Photo)
Companies

Boeing has announced a multi-year order from package delivery behemoth United Parcel Service (UPS) to meet its increased global demand for air cargo reflecting a surge in online sales as part of the broader economic recovery.

For an undisclosed amount, the order is for 19 Boeing 767 Freighters which, according to UPS U.S. Operations President Nando Cesarone, is one of the “most versatile aircraft we operate.” UPS expects a robust demand for air cargo while the deal has capped a record-breaking year for Boeing freighter sales. The airplane manufacturer has registered 80 firm orders for large production all-cargo jets along with over 80 other orders for converted freighters.

“Our plan to purchase 19 aircraft and take delivery between 2023 and 2025 aligns with the strategy and capital expenditure forecast shared during our June 2021 Investor and Analyst Day. It also supports our sustainability efforts by making our fleet more efficient and improving reliability,” Cesarone said in the press release published on Tuesday.

Compared to passenger air traffic that has erratically fluctuated based on impromptu government decisions regarding discoveries and spread of COVID-19 variants, 2021 has seen a steady increase in the air cargo market with a resurgence in e-commerce deliveries and express cargoes.

According to the report, Boeing 767 Freighters can carry up to 52.4 tons of cargo with the flexibility of flying intercontinental as well as regional. When Boeing introduced the aircraft in 1995, UPS was the launch customer. Over the years, the delivery company has ordered a total of 91 Boeing 767 Freighters, with a combined 236 Boeing freighters including 747, 757, 767, and MD-11.

“These new jets will enable UPS to meet expected near-term and long-term cargo demand with the proven economics, reliability, and flexibility that are synonymous with the 767 Freighter,” said Ihssane Mounir, Boeing senior vice president of Commercial Sales and Marketing, in the statement.

Boeing anticipates an increase of four percent year-on-year growth in air cargo over the next two decades. Based out of Chicago, Illinois, the American multinational corporation is considered to be the largest exporter, by dollar value, in the country.

Boeing controls almost 90 percent of the global freighter market and has delivered 302 aircraft since the start of the year. In 2019, the number was 380.

According to Morningstar analyst Burkett Huey, the fair value of the stock price is $249. It was reduced from $260 because of slower production and delivery, reports The Street.

The company, BA, currently trades at $199.52 and has risen more than five percent from Monday. However, the price is down 25 percent from a year-high of $269.19 reached mid-March.