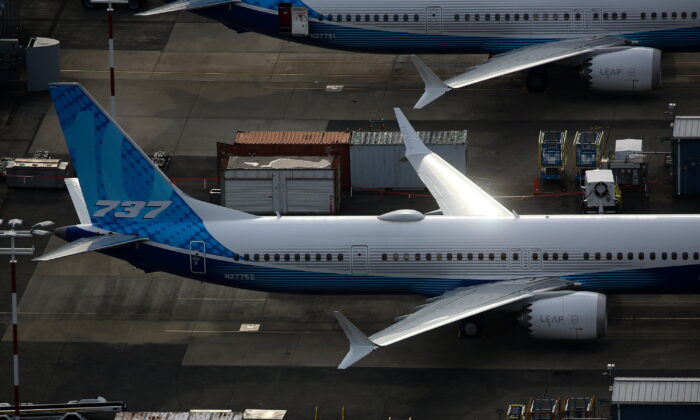 Sunlight glints off of the wing of a Boeing 737 MAX 10 airplane parked at King County International Airport-Boeing Field in this aerial view in Seattle, Wash., on June 1, 2022. (Lindsey Wasson/Reuters)
Companies

WASHINGTON—Boeing Chief Executive Dave Calhoun told Aviation Week in an interview that the planemaker could be forced to cancel the 737 Max 10 over potential regulatory issues.

Boeing has a December deadline to win approval for the 737 MAX 10—the largest member of its best-selling single-aisle airplane family. Otherwise, it must meet new cockpit alerting requirements under a 2020 law, unless Congress waives it. Calhoun’s comments could put more pressure on Congress.

“If you go through the things we’ve been through, the debts that we’ve had to accumulate, our ability to respond, or willingness to see things through even a world without the -10 is not that threatening,” Calhoun told Aviation Week, adding that he does not expect to cancel the 737 MAX 10 but said, “it’s just a risk.”

A Boeing spokeswoman confirmed the accuracy of Calhoun’s quotes and reiterated the planemaker is “working transparently with the (Federal Aviation Administration) to provide the information they need, and are committed to meeting their expectations and those of our customers to certify and deliver the 737-10.”

The 2022 deadline was mandated by Congress as part of broader regulatory reforms at the FAA after fatal 737 MAX crashes in 2018 and 2019 killed 346 people.

Unlike other Boeing aircraft, the 737 lacks the Engine Indicating and Crew Alerting System known as EICAS.