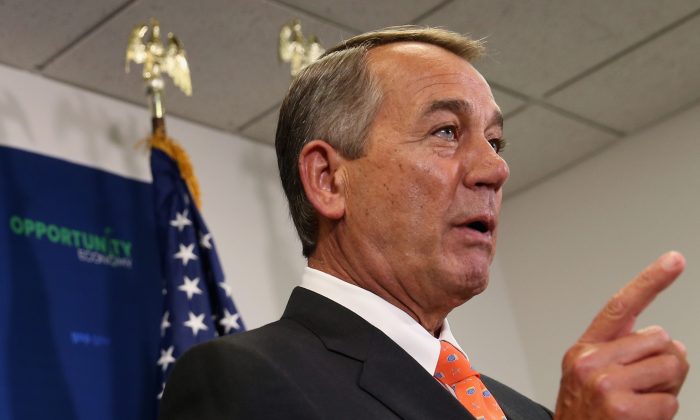 Speaker John Boehner (R-Ohio.) said the House has no plans of revising a bill funding the Department of Homeland Security, which has been filibustered by Democrats over its clauses on immigration, on February 11, 2015 in Washington, DC. (Mark Wilson/Getty Images)
Politics

House Speaker John Boehner again rebuffed calls to craft an alternate version of the bill funding the Department of Homeland Security, which is being held up in the Senate by a filibuster from Democrats.

“The House did its job. We won the fight to fund the Department of Homeland Security and stop the president’s unconstitutional actions. Now it’s time for the Senate to do their work,” Boehner said on Wednesday. “The issue is Senate Democrats. Seven of them criticized the president’s executive overreach on immigration yet they continue to block the consideration of the bill.”

The current DHS funding bill contains amendments that would defund the president’s November immigration order, which would shield 5 million illegal immigrants from deportation and grant them work permits.

The House did its job. … Now it’s time for the Senate to do their work.
— House Speaker John Boehner

Senate Republicans have repeatedly failed to obtain the 60-votes needed to put the DHS bill to the floor for debate, despite an offer from Majority Leader Mitch McConnell (R-Ky.) to open the bill up for amendments.

“If the bill needs to be amended, that’s when it could be,” McConnell said in a statement Wednesday. Boehner’s comment that the House already did its job came after McConnell had said Tuesday that the next move on the DHS bill must come from the House.

The funding for the DHS runs out on Feb. 27, and even if the bill is passed in the Senate, Obama has vowed to veto any bill that would reverse his immigration policy.

Both parties have accused each other of placing politics above national security, but it’s unlikely that a temporary shutdown of the DHS would risk exposing the United States to terrorism. The vast majority of DHS employees continued working during the brief government shutdown in 2013.

From the right, Sen. Ted Cruz (R-Texas.) has rebuked the Republican leadership for crafting a strategy meant for failure.

I fought tooth and nail against cromnibus in December because I said … this gives up our leverage.
— Ted Cruz

“I fought tooth and nail against cromnibus in December because I said in December this gives up our leverage and it puts us into effectively a boxed canyon,” Cruz told CNN Sunday. “The Cromnibus was leadership’s plan. I said at the time it is a bad plan and it is a plan that is designed to lose.”

Boehner was barely able to negotiate enough votes to pass the omnibus spending bill in the House after dissent from Republicans who wanted to amend the bill to defund the president’s November immigration order. The omnibus funded most of the government for the full year except the DHS, which Boehner said then would be used as leverage to reverse the president’s immigration policy.

The move was seen by some Republicans as a defense of the president’s immigration order, and a handful of them voted against Boehner for Speaker in January.

A temporary shutdown of the DHS would bring the president’s immigration policy to the forefront of public debate and would likely damage Democrats more than Republicans.

Polls have repeatedly found that the majority of Americans oppose Obama’s November immigration order, and a survey from Paragon Insights in late January found that 53 percent of Americans support Congress’s efforts to defund that policy.