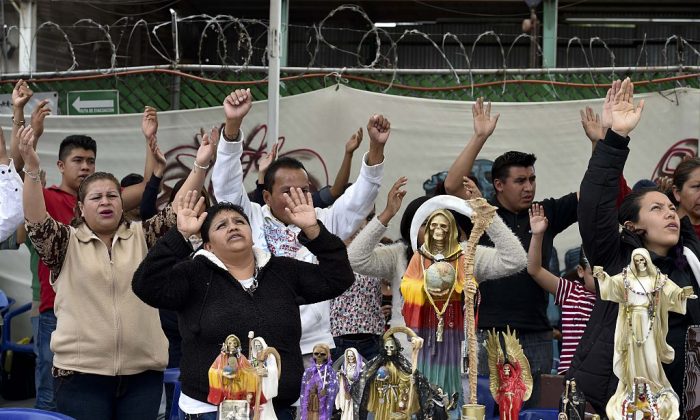 People pray in front of figures of Santa Muerte, or “Saint Death,” condemned by the Catholic church as Satanic, in Mexico on Feb. 7, 2016. (Yuri Cortez/AFP/Getty Images)
International

Editor’s Note: This article contains graphic descriptions that some readers may find disturbing.

There is a billion-dollar market for human body parts that, unlike the organ transplant market, is largely unregulated. Human heads, limbs, torsos, and everything else from arteries to fingernails are being traded by U.S. body brokers internationally.

Most of the bodies originating in the United States are donated and allegedly used for medical, scientific, and military research. The FBI raided several of these broker companies recently, including the Michigan-based International Biological Inc. and the Arizona-based Biological Resource Center, where investigators found diseased body parts being dishonestly bought, sold, and shipped abroad.

In the even darker corners of the trade, however, are issues involving African witchcraft markets, gangs that kill adults and children to sell their body parts, and even “baby factories” where infants are trafficked and used for human sacrifice.

The BBC reported on April 26 that a “baby factory” was raided in Lagos, Nigeria, where women were either coerced to give up their infants or raped to be impregnated. It states such factories are “not uncommon for Nigerian authorities to raid,” and that the babies can be sold for adoption, used for child labor, or “trafficked to Europe for prostitution or killed for ritual purposes.”

In Kenya, similar issues are surfacing. A May 17 article from Kenyan newspaper The Standard states that gangs are no longer just murdering adults and children to sell their body parts to local witch doctors. Now, even individuals in the fields of medical research are suspected of purchasing body parts of people who were murdered for the business.

Among the cases mentioned is that of former pathologist Moses Njue, who is accused of illegally removing the hearts and kidneys of two bodies that were purchased for research. Njue is accused of destroying the organs, since “they are key to tracing poisoning or establishing whether a person died of natural causes.”

Kenyans are also being warned by the World Health Organization about certain U.S. companies involved in the human organ trade. It points to a U.S.-based global kidney exchange program, which the article states “expressed an interest in securing donors from Kenya, which WHO noted was a move to exploit poor nations.”

An April 28 alert from the Council of Europe Committee on Organ Transplantation issues a similar warning against the exchange program, on grounds that “the human body and its parts shall not give rise to financial gain or comparable advantage,” noting that the program’s attempts to source organs from impoverished countries “puts vulnerable individuals at risk of exploitation.”

The incidents raise many questions not only about how the bodies of murdered individuals are finding their way into markets, but also on the lack of laws and oversight on the trade of human bodies.

According to Robert J. Bunker, adjunct research professor at the Strategic Studies Institute at U.S. Army War College, cases of ritual murder and the use of human body parts in dark “magico-religious” activities are still relatively common in certain cultures, as well as among Islamic terrorists and some transnational criminal gangs.

According to Bunker, the use of human sacrifice is part of the “left-hand path” of dark magico-religious activities, which vary in form depending on the group.

“These practices are not uncommon in animistic-based cultures in various parts of sub-Saharan Africa, in which witch doctors are considered imbued with great magico-religious power,” he said in an email, adding that often the victims are albino children.

In Mexico, many drug cartels and criminal gangs have begun adopting various forms of satanic and dark-occult worship, with the most common being the worship of the recently created Santa Muerte, or “Saint Death.” The “skeleton saint” has become the second most popular figure of worship in Mexico, after Saint Judas.

Bunker noted that ritual killings linked to Santa Muerte worship have been carried out in Mexico by the Los Zetas drug cartel. “They appear to have focused on the taking of heads—although questionable homicides have taken place in which the hearts of victims have also been removed,” he said, adding that some members of the MS-13 criminal gang has also been tied to ritual killings for “Saint Death.”

“Quite recently, some MS-13 gang members have also engaged in these practices, such as in one incident taking place in Houston in February 2017,” he said, noting other ritual sacrifice cases in which heads and spinal columns were recovered.

While body parts sold internationally may be used in dark magico-religious activities, Bunker noted that in the United States, the financial motivation for gangs to kill for the market is still relatively low. He added, however, that “the killing of someone for left-handed path rituals would be a different matter, as would deviant sexual and serial killing-motivated types of incidents, as the basis of these actions is of an extreme criminal nature to begin with.”