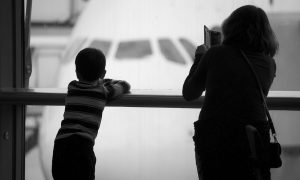 A minivan containing an estranged mother and her kidnapped 6-year-old son was found on Aug. 23: both were declared deceased upon arrival, reported the Waxahachie Police Department.

Candace Harbin, the non-custodial parent of Phillip Oliver “Ollie” Wiedemann is suspected of kidnapping her son on Aug. 22. The car that was listed in an Amber Alert was found in a parking garage.

“The cause of death and further details regarding this situation are not being released at this time, as this is an ongoing investigation,” police said. “The Waxahachie Police Department extends our thoughts and prayers to all involved in this tragic situation.”

The initial report read that it is believed that Ollie was “in imminent danger.” It was suspected he was with his mother, but no information backing the suspicion was provided.

A picture of Ollie and his mother were uploaded by the police department, including one of the white Nissan minivan listed in the Amber Alert signaled a day after he went missing.

Discrepancy in the Report

Details of the relationship between Ollie’s parents were not released, except their background of divorce and the mother’s non-custodial status.

Blake Hanson of Fox4 News wrote on Twitter that the City said there was a discrepancy in the information released by state and local officials: Ollie “was last seen being picked up from school yesterday. Dad reported him missing this AM when he didn’t show up for school. Unclear who picked him up.”

There was a discrepancy in the info state and local officials released about when he was last seen. City tells me Weidemann was last seen being picked up from school yesterday. Dad reported him missing this AM when he didn’t show up for school. Unclear who picked him up.

Hanson also uploaded a picture of the minivan being searched by authorities. In one of his videos, a seemingly empty white minivan is seen towed out of the parking garage in Waxahachie.

. @fox4 Photojournalist Quincy Thomas just got this video of the van being removed from the parking garage. pic.twitter.com/9JTrLO6Z3M

On the police department’s Facebook page, the father of Ollie commented on the press release: “Please help my son!!!”

The police are now encouraging anyone with information to call the department.

Community brought flowers, toys and cards for a makeshift memorial for 6-yr old Ollie Wiedemann. He and his mother who didn’t have custody of him were found dead in this parking garage yesterday shortly after an Amber Alert went out @FOX4 pic.twitter.com/MaY6bkLtZx

Another Fox4 reporter uploaded pictures of a makeshift memorial made for the 6-year-old.