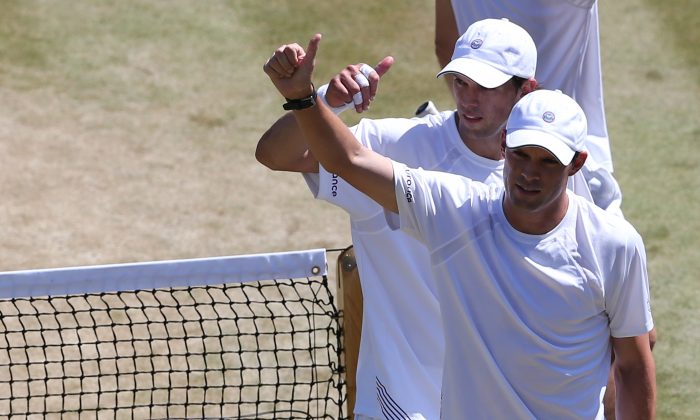 US players Bob Bryan and Mike Bryan celebrate after winning their men's doubles semi-final match against France's Nicolas Mahut and Michael Llodra on day 11 of the 2014 Wimbledon Championships at The All England Tennis Club in Wimbledon, southwest London, on July 4, 2014. The Bryan brothers won 7-6, 6-3, 6-2. (ANDREW COWIE/AFP/Getty Images)
Sports

Top seeds Bob Bryan and Mike Bryan will take on Vasek Pospisil and Jack Sock in at the 2014 Wimbledon championships.

The match features three Americans (the Bryan brothere and Jack Sock) and one Canadian.

The Bryans did not make the final in the previous three Grand Slam tournaments. They have three Wimbledon titles.

In all, brothers Bob and Mike have a record 15 Grand Slam doubles titles.

The doubles pairings have not played each other before.

The Bryans are 2/7 to win according to most bookmakers, and Vasek Pospisil and Jack Sock are 5/2.

Check out some highlights below.

LONDON (AP) — Billie Jean King believes Wimbledon finalists Petra Kvitova and Eugenie Bouchard are creating one of the most exciting times in women’s tennis in decades.

King ought to know. She helped start the Women’s Tennis Association more than 40 years ago.

The 24-year-old Kvitova of the Czech Republic won the 2011 Wimbledon title. She’ll face the 20-year-old Bouchard, who will play in her — and Canada’s — first Grand Slam final on Saturday.

They’re from a generation of fitter and stronger players who have “closed the gap on power and belief” with their older contemporaries, King said at a news conference during Wimbledon.

“They have definitely caught up,” King said. “Women have more confidence overall, Serena (Williams) is not in the same place as she was, she’s a little more vulnerable.

“The men have had their ‘Top 4.’ Now we’ve got a lot of younger women who want to be here. They like the show time.”

Here are five things to know about the big show Saturday on Centre Court:

WHAT A YEAR: Bouchard was the only woman to have advanced to all three Grand Slam tournament semifinals this year, and now she’s taken it another step. She’s received support from her home country, prime ministers and mayors, along with “The Big Bang Theory” actor Jim Parsons. She finished 2013 ranked 32nd, and she’s projected to improve to No. 7 — the highest ranking for a Canadian woman — by reaching the final. She would be the youngest Grand Slam champion since Maria Sharapova won the 2006 U.S. Open at 19.

ONLY MEETING: Kvitova and Bouchard have played just once. They faced off on hard courts in Toronto, with Kvitova an easy winner 6-3, 6-2.

NEW GENERATION: The final Saturday is the first to feature two players born in the 1990s. Kvitova is the only player born in that decade to win a Grand Slam — her 2011 title here — while Bouchard is the fourth player born in the ’90s to reach a Grand Slam final. The others are French Open runner-up Simona Halep (who lost to Bouchard in the semifinals) and former No. 1 Caroline Wozniacki, the 2009 U.S. Open runner-up.

KVITOVA’S THOUGHTS: “Bouchard is playing very solid game. She’s a very good mover. She’s nearby the baseline. I think it’s very similar to my game. I beat her for the first time last year, but it’s long time ago. This is totally different. So, I mean, I really have to be focusing on everything and try to push her.”

BOUCHARD’S PLAN: “She has good shots which are very powerful compared perhaps to opponents I played in the tournament. I think she will try to attack, but I will try to do the same thing. I think both of us will try to put pressure on each other. I think it will be important to start the points well on serve and on return. It will be the first shots that decide the match.”