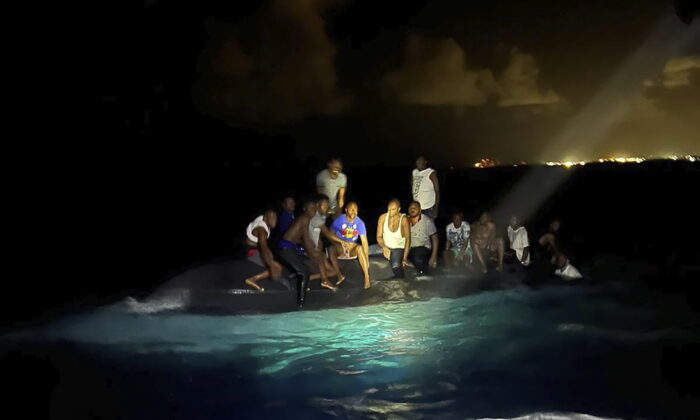 Survivors sit on a capsized boat as they are about to be rescued near New Providence in the Bahamas, early on July 24, 2022. (Royal Bahamas Defense Force via AP)
International

SAN JUAN, Puerto Rico—Authorities in the Bahamas combed shorelines and open waters on Monday in hopes of finding more survivors after a boat carrying up to an estimated 60 Haitian migrants apparently capsized.

Divers have found the bodies of 15 women, one man, and a toddler, while another 20 men and five women have been rescued since Sunday, according to Bahamian officials.

“It’s a combined effort using all available resources … to see if there are any potential survivors…as well as to recover any remains,” he told reporters.

Two Bahamian men are in custody, although it wasn’t immediately clear if they have been charged as officials launch a criminal investigation into a suspected human smuggling operation.

The twin-engine speed boat named “Bare Ambition” apparently capsized about seven miles from New Providence after leaving the Bahamas around 1 a.m. on Sunday, likely bound for Miami. It became the latest deadly voyage for Haitian migrants.

In May, at least 11 people died and 38 others were saved near Puerto Rico, while another boat carrying 40 migrants went down near Florida, with only one man rescued and another found dead.