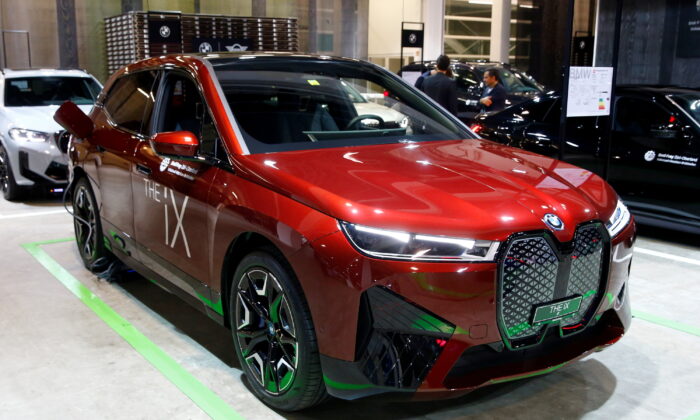 An electric-powered BMW iX xDrive 50 car during a media preview at the Auto Zurich Car Show in Zurich on Nov. 3, 2021. (Arnd Wiegmann/Reuters)
Companies

DETROIT—BMW will install and test a long-range battery developed by Michigan-based startup Our Next Energy (ONE) in the German automaker’s iX electric SUV, the companies said on Tuesday.

ONE’s Gemini battery will incorporate two types of battery cells, including one with advanced chemistry that can store more energy and enable vehicle range of 600 miles (965 km) or more between charges, the battery maker said. The prototype vehicle is expected to be completed by year-end, ONE said.

The Gemini battery aims to reduce the use of such traditional EV battery materials as cobalt, nickel, graphite, and lithium, according to Mujeeb Ijaz, ONE founder, and chief executive.

Ijaz said ONE is testing different electrode chemistries in Gemini, while evaluating the potential tradeoffs in cost, energy, and sustainability.

ONE might offer a production version of the battery in three different sizes and prices, Ijaz said, including a low-end version that would cost the same as today’s conventional nickel—and cobalt-based batteries, “if not a little lower.”

Ijaz said ONE is discussing similar prototype testing of its Gemini battery with other companies.

In March, BMW’s corporate venture arm led a $65 million funding round in ONE. Other investors in that round included Coatue Management, Breakthrough Energy Ventures, Assembly Ventures, Flex, and Volta Energy Technologies.

In December, ONE said an early prototype of the Gemini battery, retrofitted in a Tesla Model S sedan, delivered more than 750 miles (1,200 km) of range, well in excess of the best production electric vehicles on the market.

Since its founding in 2020, ONE has focused development on a long-range battery that uses safer and more sustainable materials, while packing more energy into a smaller, less expensive package.