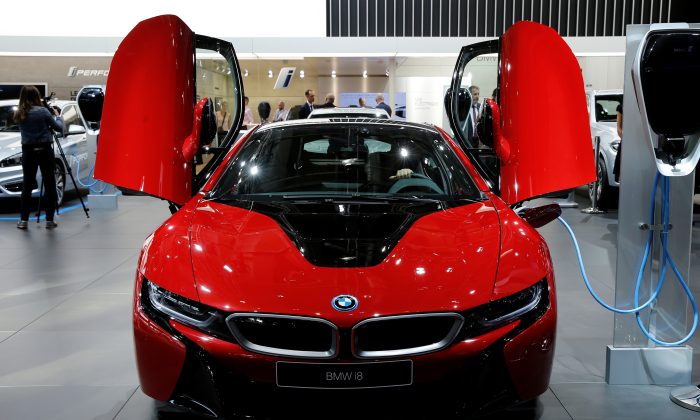 The BMW i8 car is displayed on media day at the Paris auto show, in Paris, France, on Sept. 29, 2016. (Benoit Tessier - D1BEUECVRVAB/Reuters)
Companies

Investments to develop electric and self-driving cars, as well as spending to boost production of new X5, X7, and 8-series luxury models weighed on earnings when tariffs between China and the United States, and a price war in Europe were already eroding margins.

Capital expenditure will rise again in the fourth quarter, BMW said, owing to the start of production for a new version of its flagship model, the BMW 3 series.

“Additional measures will be needed to support our profitability targets,” Chief Financial Officer Nicolas Peter said in a call to discuss earnings, without giving details.

“Despite the difficult conditions, we are still targeting a free cash flow of three billion euros for the full year,” Peter added.

“In light of the current challenges, this will not be an easy task.”

BMW’s earnings before interest and taxes (EBIT) of 1.75 billion euros came in below the 1.8 billion euros forecast in a Reuters poll as higher raw material prices, currency effects, and 679 million euros worth of provisions for vehicle recalls had an impact.

BMW said that despite a slight rise in deliveries of luxury cars, its operating return on sales for the automotive division narrowed to 4.4 percent from 8.6 percent a year earlier, well below its targeted range of 8 to 10 percent.

BMW had warned in September that its pretax profit would fall this year, against earlier expectations for a flat outcome, and cut its profit margin guidance for cars, blaming intense price competition, trade, and currency headwinds.

“Compared with 2017, additional upfront expenditure of around 1 billion euros for the mobility of the future and a high three-digit million euro negative impact from exchange-rate and raw materials price developments had been factored into expected earnings for the year,” BMW said on Nov. 7.

While BMW had fewer problems than rivals Volkswagen and Daimler in selling cars that conform to the new Worldwide Harmonised Light Vehicle Test standards (WLTP), the onset of the rules has led to cutthroat competition, supply distortions and heavy discounting.

Separately, BMW said it will purchase specific raw materials such as cobalt, and then make them available to battery cell suppliers as a way to secure a supply of electric car batteries.

BMW is establishing a technology consortium with Swedish battery manufacturer Northvolt and Belgium’s Umicore to develop a value chain for battery cells in Europe, including development, production and ultimately recycling.