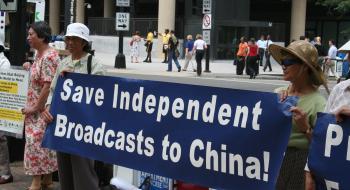 PROTESTING: Protesters were present, during the week of Aug 4-8, outside the Eutelsat location on 18th and I Street in downtown Washington, D.C. They objected to Eutelsat, a satellite company, terminating its broadcasting for New Tang Dynasty TV (NTDTV). (Gary Feuerberg/The Epoch Times)
International

NTDTV provided a rare opportunity for mainland Chinese, especially for those residing in the countryside, to receive uncensored news—very different from the news they receive from China’s state-controlled media.

NTDTV broadcasted on a W-5 Satellite in Asia, and was free to receivers, allowing people to receive the transmission utilizing Ku-band reception. This transmission allowed for the use of small satellite dishes as small as 40-80 centimeters in diameter to pick up the frequency. So, it was easily hidden from the government authorities.

“In the rural areas where it is not so easy to get a dish, they can use a cooking pot, and use that to get a signal,” said Anne Yang, NTDTV Washington bureau reporter.  According to the 2006 National Bureau of Statistics of China, an estimated 56 percent of the China’s population lives in rural areas.

NTDTV offered a breath of fresh air in an authoritarian state. It may be hard for Americans to grasp the full extent to which the average Chinese citizens living in an information controlled environment are unable to think freely and express their personal feelings and preferences, after being instilled with a heavy dose of nationalism and constantly hearing the state’s propaganda, especially during the months just prior to the Olympics.

“Focus Talk” allowed viewers to call in and share their opinions and experiences. NTDTV offered programs 24 hours a day 7 days week, which included interactive programs, such as “Inside China,” which covered stories that affect daily life in China.

“The way that people can talk and share on NTDTV, they are so free,” said another viewer to Ms. Yang.

However, the breath of fresh air from the NTDTV broadcasts was suddenly shut off.

Two weeks prior to the start of the Olympics, Giuliano Berretta, CEO of European satellite company, Eutelsat, suspended the broadcast of NTDTV to mainland China, citing a “power anomaly.” On July 10, the Paris based press watchdog group, Reporters Without Borders (RSF), published an investigative report, revealing the reason behind NTDTV’s broadcast interruption was not technical as Eutelsat claimed, but a “pre-meditated political move to appease the Chinese Communist Government,” said Pia-Maria Morris, spokesperson for NTDTV’s Washington bBureau.

NTDTV is a non -profit television network which reached roughly 200 million people worldwide with an estimated 40 – 60 million viewers in China.

The Chinese communist regime had more to fear from the NTDTV broadcasts than Chinese people expressing themselves as individuals. They were learning about the nature of the Chinese Communist Party.

NTDTV presented an historical documentary series, including the popular “Nine Commentaries” based on the report and book published by the Epoch Times, the “Nine Commentaries on the Communist Party,” a documented historical account of the rise of the Chinese Community Party, and its deceitful methods to attain and maintain its power.