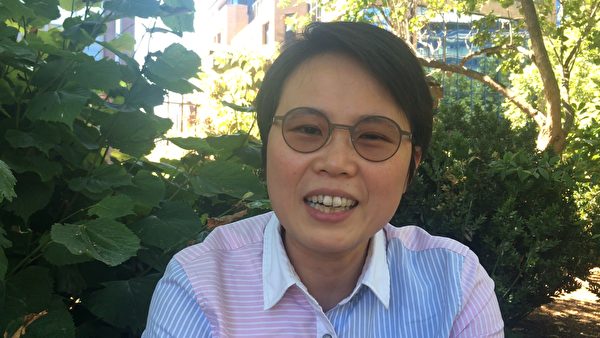 Lit Ming-wai, producer of Stage64 was interviewed by the Epoch Times in the UK on July 8, 2022. (Ben Lam/The Epoch Times)
HK Current Affairs

Stage64 is a theatrical group established in Hong Kong, that writes and produces live stage performances concentrating on the June 4, Tiananmen square massacre. Their first key production, “Edelweiss,” was performed in Hong Kong in 2009.  From 2009 to 2019, they put on many performances at the Hong Kong Arts Centre and schools to let students know about the horrific occurrences that took place.  But after the umbrella movement in 2014 and later the 2019 protests, the group says, it became more and more difficult to get school bookings. On June 4, 2020, they took a big step in screening live performances worldwide.

Since the implementation of the Hong Kong National Security Law in 2020, many pro-democracy political groups and civil organizations have been disbanded.

Many former members of the now disbanded group, The Hong Kong Alliance in Support of Patriotic Democratic Movements of China (HK Alliance), had been arrested and charged with inciting others to subvert state power under the new National Security Law.

There is little space in Hong Kong for performing shows commemorating June 4. Hence, Stage64 producer Lit Ming-wai decided to make a new life in the UK.

Lit spoke with The Epoch Times in an exclusive interview about her plans on July 8. Lit said other than organizing “35th of May” screenings worldwide, she is now preparing an English version of it; she hopes that it will be ready within the next two years.

Lit said Stage64 celebrated the 20th anniversary of June 4, 2009, with the production of the theatrical play “Edelweiss.”

As the play received incredible feedback, “Edelweiss” has become a signature play for the company since 2010.

In the years between 2009 and 2019, Stage64 produced a total of seven plays. They also began touring secondary schools all over Hong Kong and used performing art to depict the story of June 4, 1989. That lasted until 2019.

Lit remembers when she was in high school. She said, “My alma mater would commemorate June 4 and explain its history with students yearly. Many schools carried that tradition for 20 years. We had over 40 performance invitations of Stage64 from different schools in 2009.”

That changed in 2014, after the Umbrella Revolution. Responses to the performance dropped as Hong Kong schools became more “politically cautious” regarding sensitive topics.

Lit said, “For a few years after the Umbrella Revolution, responses to our tour were not ideal. But then, as the 30th anniversary of the massacre arrived in 2019, things were starting to pick up again.“ During that time, Stage 64 performed a new play called “Xiaobo and Liuxia” in 42 local middle schools. The play is about the story of Nobel Prize Winner and Human Right Activist, Liu Xiaobo.

Lit also said that about 30 schools had invited her theatrical company to perform a new production, “35th of May.” Unfortunately, it was set back by the pandemic and the implementation of the National Security Law in Hong Kong. Some schools canceled the scheduled performance; teachers were also blunt about “having no desires to be connected at all with Stage64.”

When discussing the new drama titled “35th of May,” Li described the play as a harvest on stage and an art piece responding to current happenings. Stage64 spent about 1.5 years in its preparation and invited renowned director Lee Jan-chow and Chinese playwright Candace Chong Mui-ngam to join the cast.

The general public enjoyed it as all 12 shows were sold-out.

The drama, “35th of May” snatched up five awards at the 29th Hong Kong Drama Awards, including Best Director, Best Production, Best Screenplay, Best Lighting Design, and Outstanding Creation of the Year.

Since Lit moved to England, she has run “35th of May” screening events worldwide with eight shows in her new home, three in Canada, 21 in the United States, and three in Taiwan, attended by over 1000 people.

As she is now in a country that breathes freedom, Lit wants to continue to tell the story of Hongkongers.

“June 4, 1989, is not only a democratic movement for China, but also Hong Kong. It was my political epiphany that has impacted me heavily, so allowing me to continue to fight for freedom as a Hongkonger,” Lit explained.

The Words ‘June 4’ Are Now Taboo

Since the anti-extradition protests in 2019 and the imposition of the National Security Law in Hong Kong, Lit conveyed that the date “June 4” became a banned word, a taboo; Hongkongers now call it the 35th of May. She also said that the turn of events had reshaped June 4 to include a Hongkongers’ story.

If You See the truth, it is Your Job to Tell it

Lit explained that Hongkongers witnessed a catastrophic massacre on June 4, 1989, at Tiananmen Square, “Hongkongers are now also experiencing this happening of history. As the truth and facts are blocked by the CCP and the Hong Kong government, we are responsible for telling it honestly.”