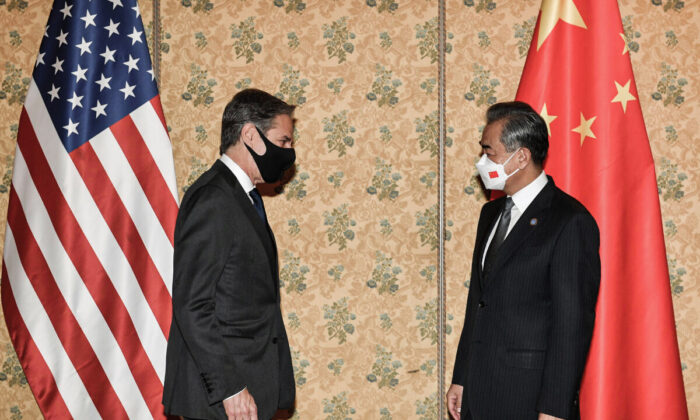 US Secretary of State Antony Blinken (L) and Chinese Foreign Minister, Wang Yi (R) meet at an hotel in Rome on the sidelines of the G20 of World Leaders Summit ON Oct. 31, 2021 . (AP Photo/Tiziana Fabi, pool)
US-China Relations

The bilateral meeting on the sidelines of a summit of Group of 20 leaders in Rome comes as Beijing’s escalating military harassment toward the self-ruled island, which it claims as its own, has triggered growing international alarm.

Blinken raised concerns that Beijing’s actions “undermine the international rules-based order and that run counter to our values and interests,” such as actions related to human rights and Taiwan, State Department spokesperson Ned Price said in a statement.

Blinken also said the two countries have areas of common interests, such as climate change, and “underscored the importance of maintaining open lines of communication to responsibly manage the competition” between Washington and Beijing, according to the brief statement.

In a longer readout from Beijing’s Foreign Ministry, Wang agreed on the need for engagement between the two countries, but blasted Blinken over a range of alleged U.S. “wrongdoings,” including the Taiwan issue.

Wang said that Washington’s support of Taiwan could cause “subversive and damaging effects” to U.S.–China relations. The Chinese communist regime, which has frequently threatened to seize Taiwan with military force, claims that any international support for the island nation amounts to unacceptable interference in Beijing’s “internal affairs.”

While the United States doesn’t have diplomatic relations with Taiwan, it maintains robust ties with the democratic island under a framework set out in the Taiwan Relations Act, which obliges Washington to provide Taipei with the means to defend itself.

The Chinese regime has stepped up its military pressure on Taiwan recently. At the beginning of October, Beijing sent nearly 150 military aircraft into Taiwan’s air defense zone over the span of four days, in a record show of force that prompted the island’s defense minister to describe cross-strait tensions as the worst he’s seen in 40 years.

President Joe Biden later sparked controversy by saying that the United States had a “commitment” to defend Taiwan if the Chinese regime attacked, a departure from Washington’s long-held policy of “strategic ambiguity,” wherein it’s deliberately vague on what it would do in such a scenario.

However, the White House later clarified that Biden wasn’t signaling a change in U.S. policy.

The Blinken–Wang talks occurred less than a month after White House national security adviser Jake Sullivan met with the regime’s top diplomat Yang Jiechi in Switzerland. During that meeting, the two sides agreed that Biden and Chinese leader Xi Jinping would hold a virtual meeting before the end of 2021.

The two leaders haven’t met in person since Biden took office in January. Though they had been expected to meet in Rome over the weekend, Xi ended up participating in the G-20 summit via video link, with Wang attending in person on behalf of Xi.