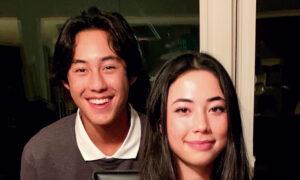 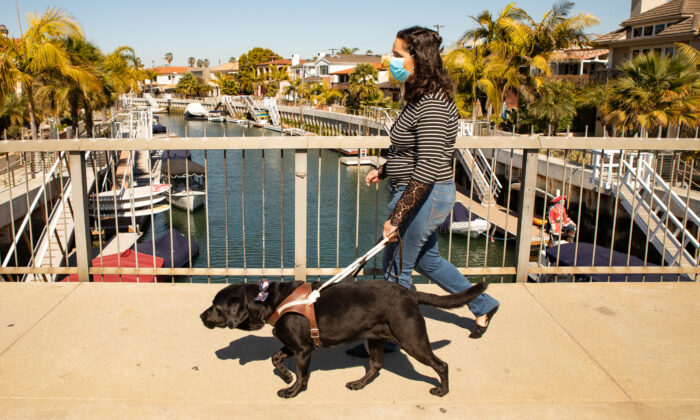 Whenever Ezzie Davis has a challenging day, she relies on her faith, her husband, and her dog, Calypso, to lift her spirits.

Calypso, a black Labrador, accompanies Davis, 31, as she takes three different buses from her home in Long Beach, California, to Costa Mesa, where she works as a professional massage therapist at Elements Massage.

“Sometimes it’s hard, but you know what? That’s why we continue to work on things,” Davis, who has been blind since birth, told The Epoch Times. “God’s not done with us until we’ve learned our lessons here on earth. … With God, all things are possible, because God is in control.”

Davis doesn’t let her lack of sight stand in the way of new experiences. During a three-year period ending in 2019, she discovered her faith, entered a new career, and got married.

“We can’t just be the victim all the time,” she said. “Sometimes, I’m just really upset about random stuff. Like, ‘Oh my gosh, I can’t believe this happened to me.’ But then my dog is still wagging her tail, wanting to play.”

Davis first met Calypso five years ago, when she went to Guide Dogs for the Blind, a guide dog training school in Boring, Oregon.

It was there that several aspects of her life suddenly came into focus. She made an appointment in Boring with a massage therapist whose expertise gave her profound comfort, and was so impressed with the experience that she began inquiring about the nature of the profession.

Though intrigued by the possibility of becoming a massage therapist, she didn’t pursue her new path until she had the opposite experience after she returned home to California: a dreadful encounter with a chiropractor who she said did some serious damage to her back.

“She kept saying, ‘Sit up straight,’ and I couldn’t because she was hurting me,” Davis recalled. “At one point, the instructor told me to just accept that this is how it works. I said, ‘No, I won’t accept it. Like, how exactly does this make any sense?’”

The contrasting experiences nagged at her. “Why did the first massage feel amazing, but then this chiropractor felt like I was being beat by rocks, essentially?” she asked. “I kept wanting to know the answer.”

Her quest to understand the art of massage therapy led her to the National Holistic Institute in Santa Ana, where she began working toward her new career.

“It was definitely a struggle. … It took lots of repetition,” she said.

But she’s been making adjustments her whole life, she noted—leaving her better equipped for tackling difficult tasks. She said she draws from her own experiences when she interacts with clients.

Davis begins by assessing their needs, asking beforehand if they’re looking for overall relaxation, or if they have discomfort or tension that needs to be addressed.

“No matter which approach we take, we have to warm up a muscle. We can’t just sneak up on a muscle,” she said. “For instance, I can’t just walk up to your house without barely knowing you, [go] to your fridge, and grab a soda. That’s messed up, right? You’ve got to welcome me, and I have to warm up to you before you offer me a drink.”

Davis said she looks forward to clients who book two-hour sessions because it helps her focus on their needs.

“It just gives me a chance to really give a great massage, as opposed to just rushing through everything in a one-hour session,” she said.

In 2015, just before massage therapy came into her life, Davis became a born-again Christian.

She was part of a choir at Fullerton College at the time, and one of the songs they sang drew its lyrics from Psalm 100: “Shout for joy to the Lord, all the earth. Worship the Lord with gladness; come before him with joyful songs.”

The message—about giving praise, being joyful, and thanking God—struck a chord with Davis. It inspired her to read the other Psalms in the Bible.

Her love of the Psalms led her to learn more about King David, a figure to whose struggles she could relate.

“He went through a lot of challenges, he made mistakes, and had a lot of consequences for his mistakes. And he kept his faith,” she said. “So I’m thinking, ‘Well, why can’t I keep my faith?’”

Reading the stories of biblical heroes—along with modern-day Christians facing persecution in the Middle East—gives her hope and encouragement daily, she said.

So does her husband, Miles. “He’s very positive all the time,” she said.

Ezzie and Miles met when they were studying music together at Fullerton College. They married in 2018, and spend their free time visiting the beach and trying new food—especially if it’s Mexican or barbecue.

Prior to COVID-19, their favorite pastime was going to the movies at least once a week, but since theaters shut down, they’ve ramped up their binge-watching at home. Davis gravitates toward dog movies like “Hachi” (“I think I cried for like 20 minutes after I watched that one,” she said), as well as scary movies: “I love the thrill that they bring.”

She said most movies include audio description tracks. If not, Miles describes the onscreen action for her as they share popcorn.

She credits Miles for keeping her grounded. “I just wish I was more like [him], which, unfortunately, I’m not—but it’s a work in progress.”