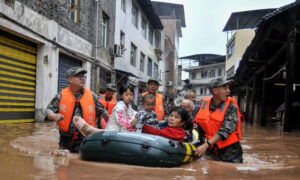 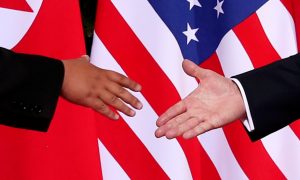 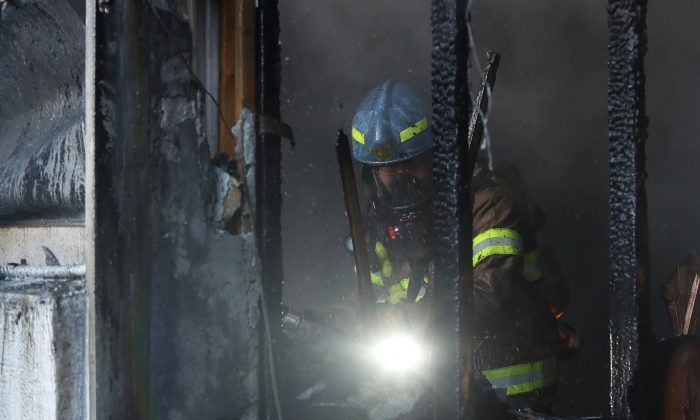 Firefighters put out a fire at a burning hospital in Miryang, South Korea, Jan. 26, 2018. (Kim Dong-min/Yonhap via Reuters)
Asia & Pacific

SEOUL–A fire in a South Korean hospital which did not have a sprinkler system killed at least 37 people and injured more than 70, officials said on Friday, the latest tragedy to raise concerns over the country’s safety standards.

The fire is the deadliest in South Korea in at least a decade, according to Yonhap news agency, and follows a fire last month which killed 29 people in a high rise sports center.

The presidential Blue House initially said the hospital fire killed at least 41, but then deferred to the city’s fire chief who put the death toll at 37.

The fire started at around 7.30 a.m. local time at the rear of the emergency room on the first floor of Sejong Hospital, Choi Man-woo, the head of Miryang city’s fire station, told a televised media briefing. Miryang is about 170 miles southeast of the capital, Seoul.

Television news footage showed a huge pall of black smoke billowing from the windows and entrance to the hospital and flames flickering.

Hospital director Song Byeong-cheol said the hospital did not have a sprinkler system and was not large enough to require one under South Korean law.

He also said the hospital had regular safety inspections.

Officials said they are still investigating the cause.

South Korea, Asia’s fourth-largest economy and one of the world’s fastest ageing populations, has faced criticism in recent years over inadequate safety standards.

President Moon Jae-in convened an emergency meeting with top aides and called on the government to take “all necessary measures” to help survivors.

At least 177 patients – most of them elderly – were at the hospital and nursing home when the fire broke out, Song said at a televised press briefing.

Media footage showed one patient covered in blankets being carried from the hospital on another person’s back.

Song said at least one doctor, a nurse, and a nurse’s aide were killed on the second floor.

Eight people were listed as critically injured and 69 slightly injured by 10:53 a.m. local time. Most of those who died were on the first and second floors of the hospital, Choi said.

There were no deaths from burns, he said, and officials were investigating the reason for the blaze.

People evacuated from the hospital were being treated at four other hospitals nearby, YTN said.

Interior minister Kim Boo-kyum traveled to Miryang to apologize for the fire. He promised the government would do its best in helping the victims, Yonhap reported.

In December, 29 people were killed in a blaze at an eight-storey fitness center in Jecheon City.

Most of the victims of that fire were women trapped in a sauna by toxic fumes, sparking anger at reports of shoddy construction, broken doors, blocked exits and other problems that may have contributed to the deaths.