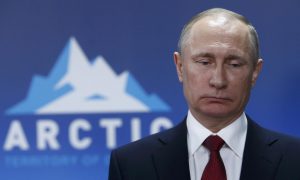 Putin Says Considering All Causes, Including Terrorism for Blast
0 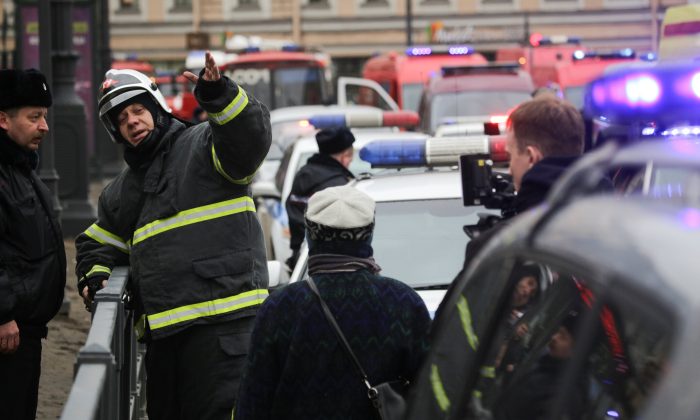 ST. PETERSBURG, Russia—A blast in a St Petersburg train carriage on Monday that killed 11 people and injured 45 was carried out by a suspected suicide bomber with ties to radical Islamists, Russia’s Interfax news agency cited a law enforcement source as saying.

Russian President Vladimir Putin, who was in the city when the blast struck, visited the scene of the explosion late on Monday night and laid a bunch of red flowers at a makeshift shrine to the victims.

Witnesses said they saw passengers who were bloodied and burned spilling out of the train, whose door was buckled by the force of the explosion, and lying on a platform while smoke filled the station.

Russia has in the past experienced bomb attacks carried out by radical Islamist rebels from Russia’s North Caucasus region. The rebellion there has been largely crushed, but Russia’s military intervention in Syria has now made it a potential target for ISIS attacks, security experts say.

There was no immediate claim of responsibility. Officials said they were treating the blast as an act of terrorism, but there was no official confirmation of any link to Islamist radicals.

Earlier, Russian media had broadcast closed circuit television footage of a bearded man they said was being sought by police as a suspect. But Interfax reported that the man had come forward and been eliminated from inquiries.

The news agency, quoting an unnamed law enforcement source, said that human remains examined at the scene suggested that the blast had been carried out by a suicide bomber. It said the police had identified a suspect with links to radical Islamist groups banned in Russia.

If it is confirmed that the bomb was carried out by radical Islamists, the Kremlin is likely to argue the attack underlines the importance of its campaign in Syria, where it is backing President Bashar al-Assad in a fight against radical Islamic terrorists.

But some sections of Russian society may see the metro bombing as proof that Putin’s decision to intervene in Syria has again made Russian civilians into targets.

Two years ago, ISIS said it brought down a plane carrying Russian tourists home from a Red Sea resort. All 224 people on board the flight were killed.

Soon after the blast happened at 2:40 p.m., ambulances and fire engines descended on the concrete-and-glass Sennaya Ploshchad station. One helicopter hovered overhead and then landed on a broad avenue to take away an injured passenger.

“I saw a lot of smoke, a crowd making its way to the escalators, people with blood and other people’s insides on their clothes, bloody faces,” St Petersburg resident Leonid Chaika, who said he was at the station where the blast happened, told Reuters by phone. “Many were crying.”

The National Anti-Terrorist Committee said an explosive device had been found at another station, hidden in a fire extinguisher, but had been defused.

The blast raised security fears beyond Russian frontiers. France, which has itself suffered a series of attacks, announced additional security measures in Paris.

Video from the scene showed injured people lying bleeding on a platform, some being treated by emergency services and fellow passengers. Others ran away from the platform amid clouds of smoke, some screaming or holding their hands to their faces.

A huge hole was blasted in the side of a carriage and the door blown off, with metal wreckage strewn across the platform. Passengers were seen hammering at the windows of one closed carriage after the train had pulled into the station.

Russian TV said many had suffered lacerations from glass shards and metal, the force of the explosion amplified by the confines of the carriage and the tunnel.

Anna Sventik, a St Petersburg resident, was traveling on a metro train that passed through the same station moments after the blast.

“Our train slowed down a bit, and one woman started having hysterics when she saw the people lying on the platform, blackened, in some places with no clothes, burned,” she told Reuters. “It was very scary.”

Officials had earlier on Monday put the death toll from the explosion at 10 people, but the National Anti-Terrorist Committee, a state agency, later said 11 people were killed and 45 were being treated for their injuries in hospital.

Authorities closed all St. Petersburg metro stations. The Moscow metro said it was taking unspecified additional security measures in case of an attack there.

Russia has been on particular alert against Russian-speaking rebels returning from Syria, where they have fought alongside Islamic State, and wary of any attempts to resume attacks that dogged the country several years ago.

Putin, as prime minister, launched a 1999 campaign to crush a separatist government in the Muslim southern region of Chechnya, and as president has continued a hard line in suppressing rebellion.