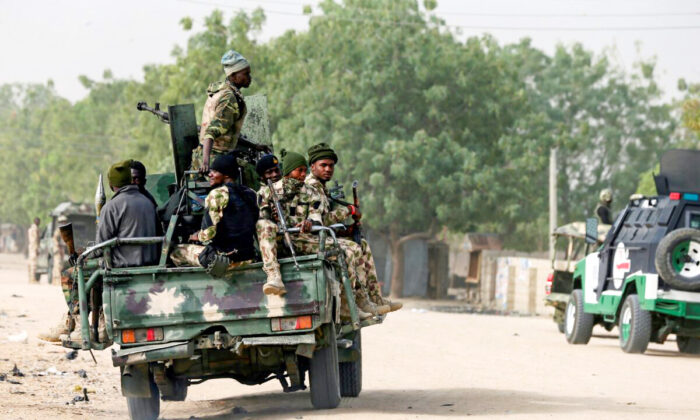 Nigerian military ride on their truck as they secure the area where a man was killed by suspected militants during an attack around Polo area of Maiduguri, Nigeria, on Feb. 16, 2019. (Afolabi Sotunde/Reuters)
Africa

ABUJA—Three people were killed and 19 injured after an explosion at a crowded market in Nigeria’s Taraba state in the east of the country, local police said on Wednesday.

Nigeria is plagued by insecurity as armed gangs and Islamist terrorists carry out attacks against communities and security targets in northern parts of the country.

Usman Abdullahi, police spokesman for Taraba, said the blast in the rural Iware community occurred on Tuesday at a drinking spot in a section of a busy market, leaving three dead and more than a dozen people with injuries.

“It is suspected to have been caused by improvised explosive device that detonated. Investigations are ongoing,” Abdullahi told Reuters via a phone message.

No group has claimed responsibility for the attack.