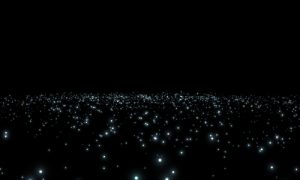 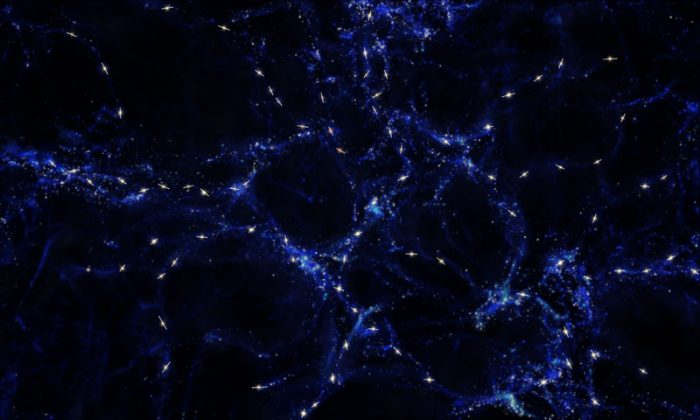 This artist's impression shows schematically the mysterious alignments between the spin axes of quasars and the large-scale structures that they inhabit that observations with ESO’s Very Large Telescope have revealed. These alignments are over billions of light-years and are the largest known in the Universe. (ESO/M. Kornmesser)
Beyond Science

When astronomers look at the universe on a grand scale—when they step back to view the arrangement of galaxies on a scale of billions of light-years—they see that galaxies are aligned in a web formation.

Galaxies clump together around gigantic voids.

New observations with the European Southern Observatory’s (ESO’s) Very Large Telescope (VLT) in Chile have revealed that the rotation axes of supermassive black holes at the center of galaxies align with each other across billions of light-years. They orient themselves along the filaments of this cosmic web.

A team led by Damien Hutsemékers from the University of Liège in Belgium studied 19 significantly polarized quasars. Quasars are galaxies with very active supermassive black holes at their centers, explains the ESO website. They shine very brightly, and the researchers looked at the polarization of light around the quasars.

The team’s study, published Nov. 19 in the journal Astronomy & Astrophysics, states: “We found that quasar polarization vectors are either parallel or perpendicular to the directions of the large-scale structures to which they belong [the web]. Statistical tests indicate that the probability that this effect can be attributed to randomly oriented polarization vectors is on the order of 1 percent.”

To summarize, it is very unlikely that this alignment is random, further supporting the idea of a grand order to the universe’s structure.

Hutsemékers said, according to an ESO press release: “The first odd thing we noticed was that some of the quasars’ rotation axes were aligned with each other—despite the fact that these quasars are separated by billions of light-years.”

The team found that not only did the rotation axes align with each other, they also aligned to the web structure of the universe on a large scale. “The alignments in the new data, on scales even bigger than current predictions from simulations, may be a hint that there is a missing ingredient in our current models of the cosmos,” said Dominique Sluse of the Argelander-Institut für Astronomie in Bonn, Germany and University of Liège, according to the ESO release. While the observations hint at a missing ingredient, they also provide some confirmation of predictions made by numerical models of the evolution of the universe.

The ESO release describes the alignment as “spooky.” Since we’re talking about observations across billions of light-years, what the astronomers observed is actually the situation many years ago, when the universe was about one-third of its current age.