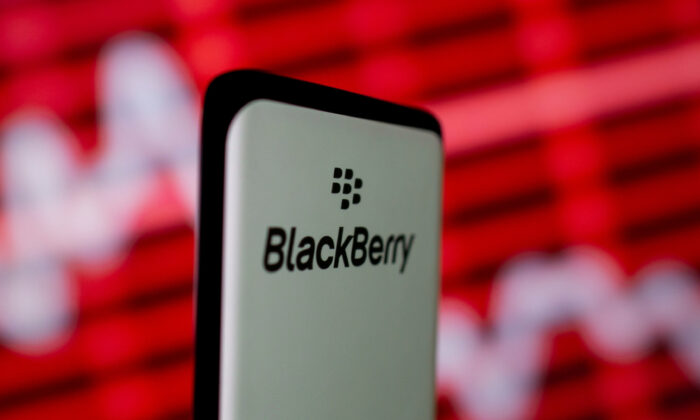 The Blackberry logo is seen on a smartphone in front of a displayed stock graph in this illustration taken on Feb. 5, 2021. (Dado Ruvic/Illustration/Reuters)
Companies

Firms such as BlackBerry are benefiting from an uptick in demand for cybersecurity and IoT products as more businesses and government organizations shift their operations to the cloud in order to support hybrid working.

As a result, the company was able to offset weakness from sluggish demand for its QNX software from automakers like Volkswagen, BMW, and Ford Motor, as the auto industry struggled to maintain production amid a persistent chip shortage crisis.

BlackBerry was dubbed a “meme stock” after a social media driven retail trading frenzy that began earlier this year sent its shares soaring. BlackBerry’s stock has surged 40 percent so far this year.

However, the company warned that a drop in automobile production volumes due to COVID-19 closures and chip shortages will continue to adversely affect the company in the next two quarters this fiscal year.

Revenue fell to $175 million for the quarter ended Aug. 31, from $259 million a year earlier, but beat analysts’ expectation of $163.5 million, according to IBES data from Refinitiv.

Net loss widened to $144 million, or 25 cents per share, from $23 million, or 4 cents per share, a year earlier. The company said a non-cash accounting adjustment to the fair value of convertible debentures, due to market and trading conditions, accounted for approximately $0.12 loss per share.

Excluding items, the company posted a loss of 6 cents per share, nudging past analysts’ expectations of loss of 7 cents.