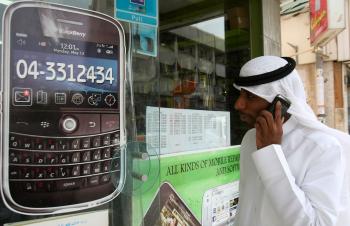 A man walks past a sign advertising the BlackBerry mobile phone at a shopping mall in Dubai on August 01. As the Gulf business hub stated it will suspend key BlackBerry services from October because they are incompatible with local laws and raise security concerns.(STR/Getty Images)
Middle East

BlackBerry Ban in UAE to Affect Visitors Too

Yi Yang
View profile
Follow
biggersmaller
Print
Restrictions on the BlackBerry functionality announced by the United Arab Emirates Telecommunication Regulatory Authority (TRA) will be extend to all visitors as well as locals.

Yesterday, the UAE had stated that Blackberry Messenger, Blackberry E-mail and Blackberry Web-browsing services in the country will be banned starting on October 11 of this year.

The reason for the suspension was due to BlackBerry’s developer Research in Motion’s (RIM) refusal to give officials access to user records, as previously reported by the Epoch Times. The device uses an advanced encryption technology, which makes intercepting mail and messaging communications difficult for government censors to monitor.

Started in 2007, UAE began attempting to “bring Blackberry services in the UAE in line with UAE telecommunications regulations,” according to UAE Interact, a media supported by the National Media Council.

Critics say that the ban is the government’s further attempt to gain control over the spread of information and citizen’s movements, according to Associated Press. However, TRA says that ban is for the sole purpose of emphasizing regulations, not censorship.

"We are not asking for RIM to do anything that is not apparently being done in developed nations or so-called open countries around the world," said Mohammed al-Ghanim, director-general of the Telecommunications Regulatory Authority, reported the Guardian.

The TRA had not specified whether the rule would apply to visitors in the country when the decision was first made, but later announced that the ban will affect everyone in the UAE.

"Roaming for BlackBerry Messenger, BlackBerry e-mail and BlackBerry Web browsing will also be suspended," the TRA said in an e-mail to the Associated Press. "They won't be able to use the mentioned services in (the) UAE as it's suspended (in) the country."

The extension means that the popular smartphone service will be inaccessible in the busy airports of Dubai, which can be an inconvenience for travelers on stopovers.

RIM has not offered a comment regarding the extension of the plan.