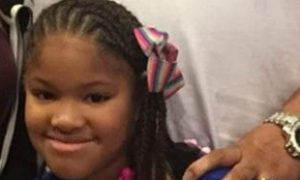 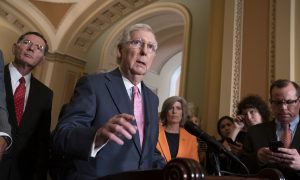 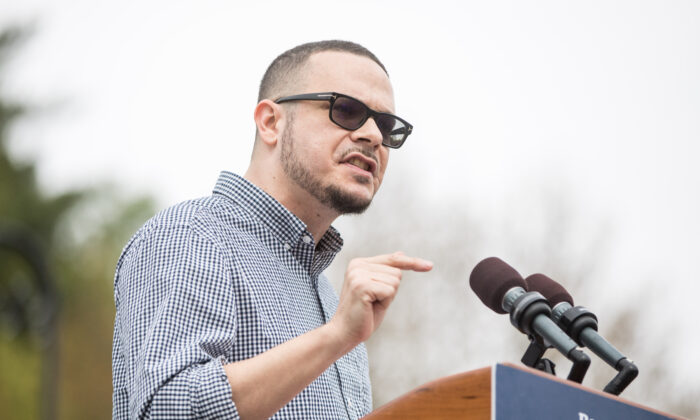 Shaun King introduces Democratic presidential candidate Bernie Sanders during a rally in the capital of his home state of Vermont in Montpelier, Vt., on May 25, 2019. (Scott Eisen/Getty Images)
US News

“To the Kenosha Police Department, If you do not name the officer who brutally shot Jacob Blake on Sunday, we will simply begin naming officers from your department who may or may not be him,” Shaun King wrote on Twitter.

“[Expletive] it. Your protection of his identity is unethical. What’s his name?”

King’s threat, which fits the definition of terrorism, is the latest in an increasing sign of radicalism within the movement.

King didn’t respond to requests for comment sent directly and to a representative.

The Intercept, which employs King as a contributor, didn’t respond to an inquiry on his threat.

Rioters chanting “black lives matter” have destroyed buildings and looted businesses in Kenosha, a city in southeast Wisconsin, since Sunday night, following the shooting of Blake.

The 29-year-old was involved in a domestic incident. Police officers responded and were seen struggling with the man before he got up and walked to his car.

When he reached inside the driver’s side, he was shot.

Blake was rushed to the hospital. He suffered serious injuries, and has undergone multiple surgeries, family attorneys told the media on Tuesday.

“We are grieved by Jacob’s attempted murder and outraged that even after the global watershed of protest following the death of George Floyd, Ahmaud Arbery, Breonna Taylor, Tony McDade, and Jayne Thompson in close succession, we have found ourselves here, again, demanding justice for the excessive use of force by law enforcement against a black life,” she said in a statement.

“We must continue to unite in defense of black people and stand with those calling for the immediate dismantling of anti-black racism in this country, which includes defunding the police and the racially charged agenda to overpolice and criminalize our black bodies and communities,” she added later.

Attorney B’Ivory LaMarr, who is helping represent Blake’s family, told reporters Tuesday that the officers involved in the shooting should be fired.

“We’re demanding the police department to take swift action. We ask for transparency. We ask for our local and governmental officials to act swiftly to enforce legislation. It’s not so much about creating new legislation. It’s about enforcing what’s on the books now. And that’s what we call for. That’s what this family wants. And we will not stop until we get it,” he said.

King, a surrogate for Sen. Bernie Sanders (I-Vt.) during the senator’s presidential run, has a history of spreading misinformation. He accused the wrong man of killing a 7-year-old girl in Houston last year, claiming it was fueled by racial animus. The men arrested for the crime ended up being black, the same race as the girl.

Activists linked to Black Lives Matter have recently refused to denounce rioting and property destruction. Some have been linked directly to brutal violence. The movement is pushing for a range of radical measures, including abolishing police departments and reparations for descendants of slaves.

Others in the movement have danced around the issue without providing a clear answer.

King in June called for statues of Jesus to be torn down, claiming they’re “a form of white supremacy.”