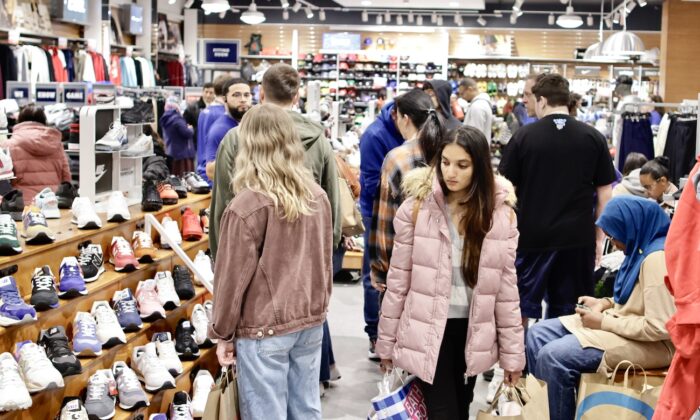 Fewer Americans headed to shopping malls during the Black Friday weekend compared to last year, new data suggests, as rampant inflation and economic uncertainty took a toll on retailers during the shopping holiday.

Indoor malls, open-air lifestyle centers, and outlet malls all saw declines in foot traffic during the weekend of Nov. 25 to 27 compared to last year’s Black Friday weekend, according to data released by Placer.ai, a company that provides location analytics to retailers.

Foot traffic in outlet malls fell the most, declining 3.9 percent compared to last year, while indoor malls and lifestyle centers saw traffic fall by 2.3 percent and 0.5 percent respectively. Inclement weather played a role in keeping shoppers at home, as did high costs, with annual inflation reaching nearly 8 percent in October.

Malls fared even worse when compared to 2019, the last Black Friday weekend before COVID-19 triggered retail closures and a shift to online shopping. Traffic at indoor malls was down 14.2 percent relative to three years ago, while lifestyle centers and outlets witnessed declines of 11.7 percent and 17.8 percent.

The Placer.ai report paints a different picture than an annual survey by the National Retail Federation, which found that a record high of nearly 197 million Americans shopped during the five-day period from Thanksgiving Day through “Cyber Monday” on Nov. 28, rising 6 percent from last year.

But the federation’s survey of consumers covers a longer time period and includes online sales along with brick-and-mortar store visits. Placer.ai reports on physical store visits only and computes footfall by using cameras, in-store sensors, data sent from mobile devices, and visitor interviews, as well as actual counting of shoppers.

Department stores fared the worst of all retail sectors in the company’s report, with visits falling 10.5 percent from last year and 26.6 percent from 2019, following the closure of many locations in recent years.

The beauty and self-care sector bucked these negative trends with an 11.7 percent annual increase in visits and a nearly 30 percent increase compared to three years ago.

Online sales were $9.12 billion and $11.3 billion on Black Friday and Cyber Monday, respectively, according to data from Adobe Analytics. The rates of growth versus last year—2.3 percent and 5.3 percent—were lower than inflation, suggesting that consumers were actually buying less than in 2021.

Americans are racking up debt in order to keep pace with rising prices. Aggregate credit card balances have reached $925 billion, according to data from the Federal Reserve Bank of New York. That figure is up 15 percent from last year, the largest jump in two decades.