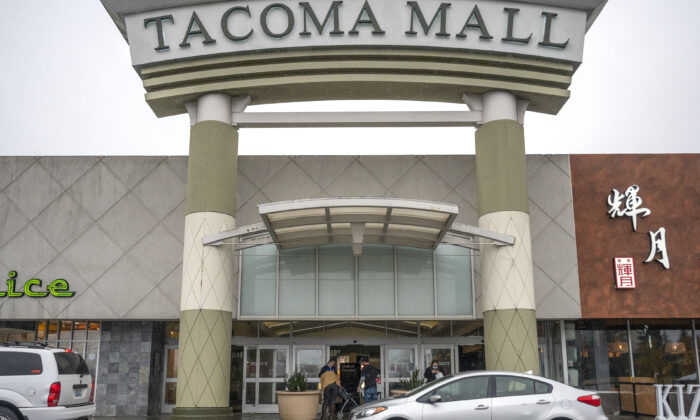 People walk into the north entrance of the Tacoma Mall in Tacoma, Wash., on Nov. 27, 2021. (Pete Caster/The News Tribune via AP)
Crime and Incidents

Three men were killed and four others were left with non-life-threatening injuries in a shooting incident at a Nashville, Tennessee, apartment on the evening of Nov. 26, according to police.

The Nashville Police Department said in a statement that it’s unclear what led to the shooting inside the Torbett Street apartment shortly before 10 p.m. on Nov. 26. There were no signs of forced entry and two guns were recovered at the scene, police said, identifying the three deceased victims only as “young men.”

Homicide Unit detectives are investigating the shooting, which was one of several to take place on Black Friday.

Homicide Unit detectives are investigating what led to gunfire inside a Torbett St. apartment Fri. @ 9:45 pm that claimed the lives of 3 young men. 4 others inside the apt sustained non-life threatening injuries. No signs of forced entry. 2 guns recovered. Info?Call 615-742-7463. pic.twitter.com/JXuiGQUu2X

In Washington state, the Tacoma Police Department said in a statement that a shooting took place at the Tacoma Mall just after 7 p.m. on Nov. 26, with one person left seriously injured and taken to the hospital.

A 10-year-old child was among three people wounded when gunfire broke out at a mall in Durham, North Carolina, local media outlet WRAL cited police as saying, with the child suffering non-life-threatening injuries from a ricocheted bullet. Three other people were injured in a chaotic evacuation of The Streets at Southpoint mall in response to the shooting, the outlet reported.

Footage from inside the mall shared on social media shows panicked shoppers running for cover.

“The shootings in this city have got to stop,” Durham Police Chief Patrice Andrews told reporters at a briefing, noting that the incident involved two groups of people who knew each other.

“We have worked with all of our federal partners to identify these individuals that are bent on coming to our community and wreaking havoc. We will be sending them to federal prison,” Andrews said, according to WRAL.

A number of smash-and-grab crimes also occurred on Black Friday, including at least two in Los Angeles County, according to Fox News.

One of the incidents involved a large group of suspects storming a Home Depot in Lakewood, California, and stealing tools, including crowbars and sledgehammers, before escaping in getaway vehicles waiting outside, the media outlet reported.

Another incident involved a large group of suspects entering a Bottega Veneta store in the Beverly Grove neighborhood of Los Angeles, using pepper spray on some people who tried to intervene and making away with some high-end merchandise, Fox News reported.