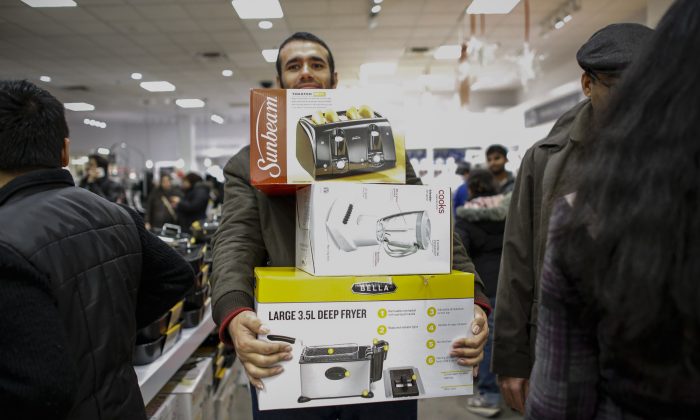 A man shop at the JCPenney store at the Newport Mall on Thanksgiving day in Jersey City, N.J., on on Nov. 27, 2014. (Kena Betancur/Getty Images)
Business & Markets

After years of Black Friday sales creeping into Thanksgiving, many retailers have realized it isn’t worth it, and are encouraging employees to spend time with their families instead.

For at least half a century, Black Friday has been the biggest shopping day of the year; the acknowledged start to the Christmas sales season—the day retailers move into the black.

But as stores started opening their doors earlier and earlier until finally creeping into Thanksgiving itself, something was bound to give: Either Thanksgiving would be defended as a day for families, or it would become a day like any other.

As it turns out, something in the middle happened.

Retailers, discovering that doorbuster sales aren’t necessarily more profitable, and can even be harmful in terms of brand affinity with employees and consumers, have started to retreat from opening on Thanksgiving Day.

“Black Friday creep” first started five years ago when Toys R Us decided to open at 10 p.m. on Thanksgiving Day. Target followed suit in 2012. By 2013, other major retailers including Macy’s, Staples, and Best Buy decided to adopt the new trend by opening on Thanksgiving evening, according to MarketWatch.

Facebook group Boycott Black Thursday was created in 2011 and is still going and has over 142,000 likes (by Nov. 24). The group said it’s unethical not to consider the families of the men and women who work on what should be a national holiday for all.

There’s an online signature campaign Pledge to Not Shop on Thanksgiving on MoveOn.org Petitions, which has garnered over 143,000 pledges. The petition creators said they plan to deliver the signatures to retail CEOs.

A new survey by Rich Relevance, found that roughly 2 out 3 Americans (64.5 percent) “hate” or “dislike” the trend of retailers opening stores on Thanksgiving Day, while only 12.5 percent “like it” or “love it.”

Of course not all consumers agree, with some seeing shopping as quality time with loved ones. A survey by the International Council of Shopping Centers, found that among those who plan to shop on Thanksgiving, 43 percent do it as a “fun opportunity” to shop with family and friends.

Moreover, hitting the stores on the national holiday is also less offensive the younger you are. In a survey by BestBlackFriday.com, 53 percent of 18- to 24-year-olds agreed stores should be open on Thanksgiving, while only 18 percent of over 34-year-olds felt the same.

Despite some obvious backlash against Black Thursday, the outcry probably isn’t the main reason some retailers are closing. Instead, more companies are seeing increased benefits of staying closed.

Many retailers have decided not to open on Thanksgiving Day—or to publicize that they never have—as a way to promote their corporate values and boost company image.

Clothing retailer H&M joined the movement against Black Thursday this year. In a letter to employees, H&M North American President Daniel Kulle, said the decision is to allow employees to spend that time with friends and family.

“We’ve been discussing this for some time and in the spirit of constant improvement, we are always evaluating what is best for our employees and the brand,” Kulle said in a letter posted on Facebook on Nov. 2.

Office supply chain Staples opened on Thanksgiving the past two years, but this year they will only offer deals online.

“We want our customers and associates to enjoy Thanksgiving their own way,” stated Demos Parneros, president of North American stores and online.

Big retail chains like Costco and Nordstrom are continuing their tradition of staff Thanksgiving off.

We think that Black Friday has gotten out of hand.
— Jerry Stritzke, president and CEO, REI

GameStop, with nearly 6,500 stores worldwide, has taken the opportunity to differentiate their brand.

“We know this is in stark contrast to what many other retailers are doing, but we are taking a stance to protect family time during this important holiday,” said Mike Buskey, executive vice president and president of U.S. stores.

Outdoor gear retailer REI took it even further, announcing on Nov. 16 they will not only close on Thanksgiving, but on Black Friday too and will even pay their 12,000 employees to do something other than work.

Jerry Stritzke, president and CEO of REI said in a press statement that they are inviting the nation to join them in choosing to #OptOutside to spend outdoor time with family and friends this Thanksgiving.

“We think that Black Friday has gotten out of hand and so we are choosing to invest in helping people get outside with loved ones this holiday season,” Stritzke said.

REI’s #OptOutside movement has garnered nearly 1 million endorsements including over 150 companies, nonprofit organizations, and agencies, the company said on Nov. 23.

Kevin Paul Scott co-founder of ADDO, a brand and experience consultancy, thinks that retailers closing on Thanksgiving Day is a great move.

“When you stay closed, and you communicate the reason why you’re staying closed to consumers, you build long-term brand affinity with them because they know exactly what you stand for,” Scott said.

According to Deloitte’s 2015 pre-Thanksgiving survey, 56 percent of respondents said they feel more loyal to retailers that close on Thanksgiving Day, and 50 percent said they will hold out to shop at their preferred retailers when they reopen after the holiday.

The businesses that are choosing to stay closed are building tremendous affinity with their employees.
— Kevin Paul Scott, co-founder, ADDO

For employees it communicates the right message too.

“It’s increasingly competitive to get front line, hourly employees. So the businesses that are choosing to stay closed are building tremendous affinity with their employees,” Scott said.

According to Scott, retailers closing on Thanksgiving isn’t a new thing, but the PR side of it is.

“The trend recently is the stores that are staying closed, are advertising the fact that they are staying closed. I think that trend has less to do with the holiday and more to do with companies deciding to communicate their corporate values to their customers,” he said.

While the value of brand affinity in the short term can be harder to measure, in terms of revenue, retailers that resist Black Thursday may not be losing out either.

According to data from National Retail Federation (NRF), last year only 32 percent of consumers who shopped over the weekend did so on Thanksgiving Day, which was similar to the previous year, even though more retailers had extended hours in 2014.

In effect, opening on Thanksgiving may only serve to erode Black Friday sales, a phenomenon that consumer analytics firm ShopperTrek has noted too.

“We’ve seen an increase in Thanksgiving shopping over the past few years at the expense of Black Friday. More stores are opening, and earlier, which has caused a shift in shopping patterns,” said ShopperTrak founder Bill Martin in a post on the company website.

Two new trends also greatly affect the Black Thursday equation for retailers: sales that last longer than a day or a weekend, and the growth of online shopping.

While creating urgency through the one-day sale has served the industry well for years, in the new reality retailers are seeing the benefit of stretching their prime revenue season over a longer period of time.

November 2015 has more days advertising sales than last November, according to ShopperTrak. And last year, the average discount offered on Black Friday (40 percent) was only slightly better than deals offered throughout November and December.

The natural extension of this thinking is harnessing the power of online shopping. Cyber Monday used to have some cachet, but now many companies offer the same deals online as their brick and mortar stores, and over a longer period.

Black Thursday may turn out to be a flash in the pan.

Amazon pushes the envelope the furthest, attempting to merge every strategy into a single campaign. It started its Black Friday sale back on Nov. 20, and has created urgency and addiction by promising new discounts as often as every 5 minutes (it was 10 minutes last year) in addition to Deals of the Day.

Looking at the experience of the last few years, Scott thinks Black Thursday may turn out to be a flash in the pan.

“I believe in a couple of years that those open retailers are not seeing incremental sales, and when they see their competitors who chose to stay closed having just as good as sales and happier employees, then they will end up making that decision as well,” said Scott.

Of course, not all companies will make that decision, so ultimately the field will split in two directions.

“I think your going to see some stores continue to move earlier, but I think you will see more stores decide that it’s not worth it and they’ll keep their doors closed on Thanksgiving Day,” he said.

[Spending] holidays with families I think is more beneficial than making people work and encouraging people to shop when they can just shop on the Friday.

What’s one day difference? Let [the employees] stay home on Thanksgiving with their families.

They may be more encouraging workaholics rather than family time. Family time probably makes for happier employees overall.

And as for the people that work here, I don’t know, they might have more fun in the stores.

Holidays are about being together with family, taking some time off to relax, celebrate, have a good time, and here they are pushing us to keep going out, to keep buying.

I have several family members in France who work in retail and they hate having to give up spending all that time with their family to have to go into work.

Janita Lum contributed to this report.