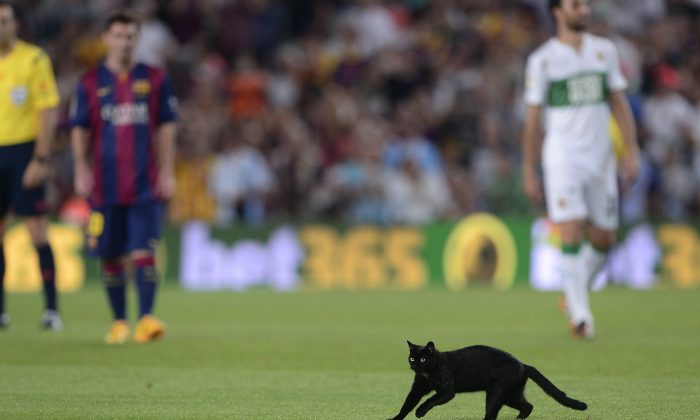 A black cat walks on the pitch during the Spanish league football match FC Barcelona vs Elche CF at the Camp Nou stadium in Barcelona on August 24, 2014. (JOSEP LAGO/AFP/Getty Images)
Europe

There was a pitch invader at Camp Nou today.

A black cat trooped out on to the pitch as Barcelona took on Elche in a La Liga game on Sunday, August 24.

It walked up and set in Barca’s penalty area, and defender Javier Mascherano had to chase it away.

The cat refused to leave the field, and instead dashed the length of the field before settling near the opposing end.

Two minutes into game time, a pitch assistant successfully shoo-ed the stubborn feline off the field, and the game resumed.

And in a quirky turn of events, Mascherano got himself a red card for a foul and was sent off in the 44th minute, which might strengthen the age-old belief about the superstitious and unlucky nature of black cats in one’s path.

AP: 5 Things to Know About the Spanish League

BARCELONA, Spain—The Spanish league opens this weekend with the three main title contenders – Atletico Madrid, Real Madrid, and Barcelona- all facing smaller clubs they will be expected to beat.