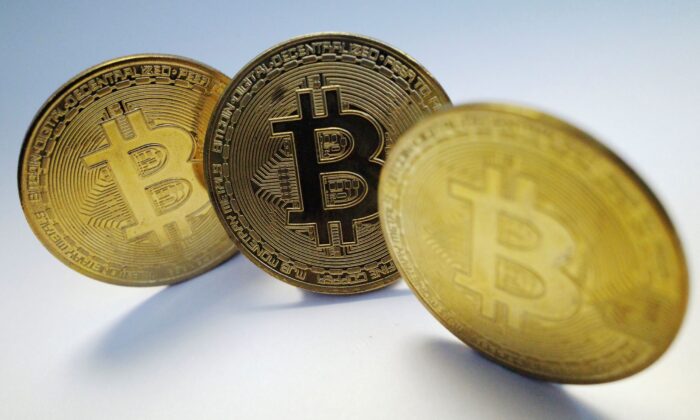 A representation of the virtual cryptocurrency Bitcoin is seen in this picture illustration taken on Oct. 19, 2021. (Edgar Su/Reuters)
Markets

Bitcoin Slips Below $60,000 for the First Time in More Than Two Weeks

Bitcoin, the world’s biggest and best-known cryptocurrency, slipped below $60,000 on Tuesday, taking losses from a record high of $69,000 struck on Nov. 10 to more than 12 percent.

Cryptocurrency analysts could not identify any particular news driving the falls, which they said seemed to be driven by profit taking after a recent sharp run-up.

Bitcoin has more than doubled in value since June, driven by the mainstream adoption of cryptocurrencies and the launch in the United States of futures-based bitcoin exchange traded funds.

And on Sunday it went through a major upgrade, called Taproot, that enables its blockchain to execute more complex transactions, potentially widening the virtual currency’s use cases and making it a little more competitive with ethereum for processing smart contracts.

“The next key support level is 58,000, but I think it gets bought up here, and demand driven prices will begin to play out to the upside.”

Most investors expect bitcoin to remain between $50,000 to $75,000 in the next 12 months, according to BofA Securities’ monthly fund manager survey, while 59 percent believe bitcoin is in a bubble.

Money pouring into bitcoin products and funds have hit a record $9 billion so far this year, and totalled $151 million last week in their 13th consecutive week of inflows, data from digital asset manager CoinShares showed on Monday.

Although flows have been positive recently, volumes have been subdued in the second half, averaging $750 million daily versus $960 million in the first, the CoinShares report said.