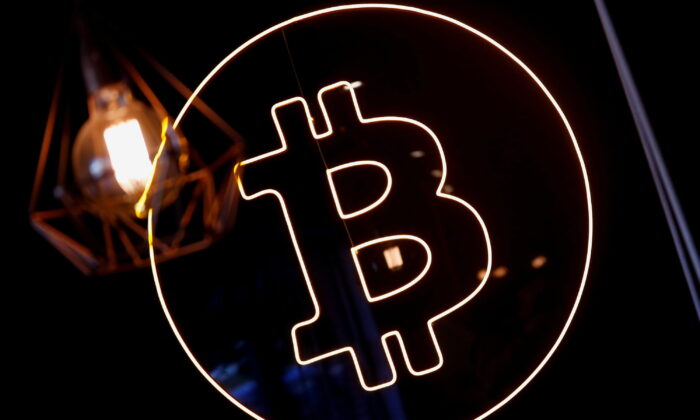 A neon logo of cryptocurrency Bitcoin is seen at the Crypstation cafe, in downtown Buenos Aires, Argentina, on May 5, 2022. (Agustin Marcarian/Reuters)
Cryptocurrency

Bitcoin dipped below $20,000 on Saturday, continuing a drop that has taken it down nearly 60 percent from its year high.

Bitcoin, the world’s biggest and best-known cryptocurrency, was last down 1.5 percent at $19,946 on Saturday, down $298 from its previous close.

Ether, the coin linked to the ethereum blockchain network, meanwhile dipped 2.76 percent to $1,467.2, losing $41.60 from its previous close.

Bitcoin’s fall comes after a weak day on Friday for the currency, which fell as Wall Street slumped with all three benchmarks ending more than 3 percent lower.

The weakness in risk assets came after Federal Reserve Chief Jerome Powell cautioned against expecting a swift end to its rate tightening. The Fed’s actions on interest rates has caused some investors to forecast more pain for equities.

“Bitcoin broke below 20,000 as investors expect a weekend full of pessimism from Jackson Hole to drag down sentiment,” Edward Moya, senior market analyst at OANDA, said on Saturday.

“European and Asian central bankers will likely be much more pessimistic than Fed Chair Powell and that has many traders bracing for a weak open on Sunday night,” he added.