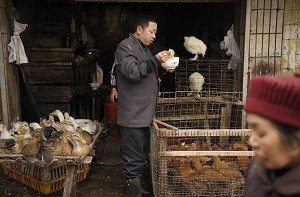 HONG KONG—One of China's top doctors has said that the H5N1 bird flu virus has shown signs of mutation and can kill human victims more easily if treatment is not given early enough, newspapers reported on Tuesday.

Zhong Nanshan, an expert on respiratory diseases, told reporters in Beijing that vigilance should be kept up, especially when H5N1 human cases are surfacing at a time when seasonal human influenza is at a peak.

“When avian flu is around and human flu appears, this will raise the chances of avian flu turning into a human flu. We have to be very alert and careful in March,” Zhong was quoted by the Ming Pao newspaper as saying.

“People who were killed by bird flu last year and this year were too poor to seek treatment. If you happen to have high fever and pneumonia, you must seek treatment fast.”

Although the H5N1 virus has infected only 368 people around the world since 2003, its mortality rate has been worryingly high, killing 234 of them.

Experts fear it could trigger a pandemic killing millions if it ever learns to transmit efficiently among people.

“The bird flu virus has shown signs of mutation. If infected people don't get treatment in a timely manner, they can die easily,” Zhong was quoted as telling Hong Kong reporters on the sidelines of the Chinese parliament's annual meeting.

Three Chinese died this year of H5N1 bird flu and they were infected probably through contact with sick poultry. The World Health Organisation said there was no evidence of transmission between humans in all three cases.

Hong Kong, which lies at the south of China, is going through a seasonal flu peak, with outbreaks reported in a growing number of schools.

A 3-year-old girl died last week of human H3N2 flu and authorities have ordered schools to conduct fever checks and advise those who are unwell to stay home.

A 7-year-old boy died around noon on Tuesday after being admitted to hospital last week with flu-like symptoms, a health department spokesman said. Authorities are still trying to determine the cause of his illness.