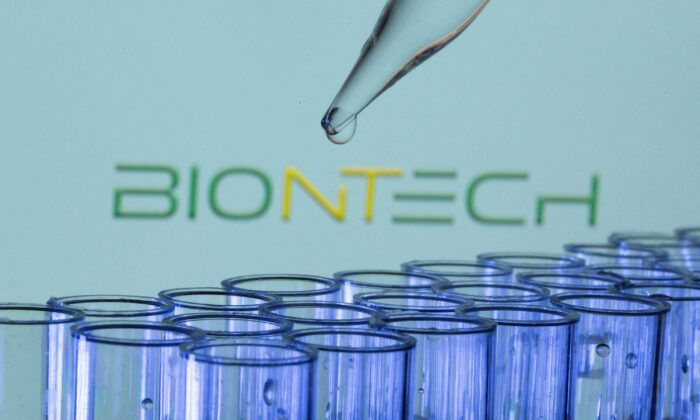 Test tubes in front of a displayed Biontech logo in this illustration taken on May 21, 2021. (Dado Ruvic/Illustration/Reuters)
Economy

FRANKFURT—COVID-19 vaccine maker BioNTech said on Tuesday that it and partner Pfizer have filed a complaint with the U.S. District Court in Massachusetts, seeking a judgment that they did not infringe U.S. patents held by rival CureVac.

The lawsuit, filed Monday, said CureVac is trying to profit from the success of BioNTech and Pfizer’s COVID-19 vaccines after CureVac’s efforts to create its own vaccine failed.

CureVac earlier this month filed a patent lawsuit in Germany against BioNTech over its use of mRNA technology and did not rule out further legal action against BioNTech’s partner Pfizer or rival mRNA vaccine maker Moderna Inc..

BioNTech said that CureVac’s U.S. patents were equivalent to German patents invoked by CureVac in the German court case.

BioNTech and Pfizer asked the Boston court to declare that their Comirnaty vaccine does not violate three CureVac patents related to RNA-based vaccines. The companies told the court that Comirnaty does not work in the same way as CureVac’s patented technology.

One of the patents concerns messenger RNA (mRNA) connected to lipid nanoparticles (LNPs), which the vaccines use to deliver the molecules safely into the body. Pfizer, BioNTech, and Moderna have been hit with U.S. patent lawsuits by other biotech companies this year over the LNP technology used in their vaccines.

Pfizer has said that it expects $32 billion in revenue from Comirnaty this year.

CureVac said in a statement it was aware of BioNTech’s legal action but had not yet been formally served.

“We will review the matter legally in detail and represent our position accordingly,” it added.