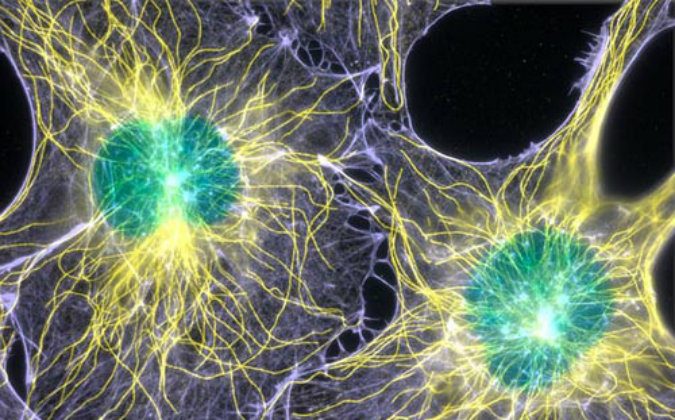 Protein microtubule: Fluorescence speckle microscopy, which tags a fraction of a protein, can improve image focus and the visibility of structures and dynamics in thick regions of living cells. Here, speckle microscopy illuminates the intricate network of microtubule (yellow) and actin filament (purple) fibers that builds a cell's structure. (Torsten Wittmann, UCSF)
Science

Bioengineers at the University of California, San Diego have discovered that mouse embryos are contemplating their cellular fates in the earliest stages after fertilization when the embryo has only two to four cells, a discovery that could upend the scientific consensus about when embryonic cells begin differentiating into cell types. Their research, which used single-cell RNA sequencing to look at every gene in the mouse genome, was published recently in the journal Genome Research. In addition, this group published a paper on analysis of “time-course”single-cell data which is taken at precise stages of embryonic development in the journal of Proceedings of the National Academy of Sciences.

“Until recently, we haven’t had the technology to look at cells this closely,” said Sheng Zhong, a bioengineering professor at UC San Diego Jacobs School of Engineering, who led the research. “Using single-cell RNA-sequencing, we were able to measure every gene in the mouse genome at multiple stages of development to find differences in gene expression at precise stages.”

The findings reveal cellular activity that could provide insight into where normal developmental processes break down, leading to early miscarriages and birth defects.

The researchers discovered that a handful of genes are clearly signaling to each other at the two-cell and four-cell stage, which happens within days after an egg has been fertilized by sperm and before the embryo has implanted into the uterus.  Among the identified genes are several genes belonging to the WNT signaling pathway, well-known for their role in cell-cell communications.

The prevailing view until now has been that mammalian embryos start differentiating into cell types after they have proliferated into large enough numbers to form subgroups. According to the co-authors Fernando Biase and Xiaoyi Cao, when the first cell fate decision is made is an open question. The first major task for an embryo is to decide which cells will begin forming the fetus, and which will form the placenta.

Original article can be viewed here.