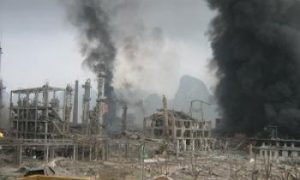 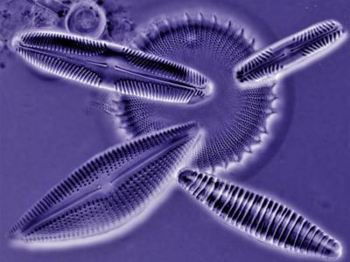 Biodiversity: Streams contain a variety of types of algae that remove pollutants from the water. This microscope image shows several species of algae similar to those used in the University of Michigan biodiversity study. (Courtesy of Danuta Bennett)
Science

By Kat Piper
Print
With some scientists predicting that species loss is happening so fast we are heading for another mass extinction, ecologists have been trying to work out just what effect this loss of biodiversity would have on our lives and why conservation could be important.

While scientists have known for a long time that ecosystems with many plant species in them—those with a high biodiversity—are better at removing pollutants from the water and soil than ecosystems with fewer species, no one has understood why.

In a study on algae biodiversity and water quality published in the April 7 issue of Nature, ecologist Bradley Cardinale, an assistant professor at the University of Michigan, says he has recently solved this mystery.

In an experiment, Cardinale found that streams with a high biodiversity of algae were much more efficient at removing nitrate—a common pollutant found in fertilizers and sewage—than streams with a single algae species.

This is because each algae species occupies a different “mini-habitat,” or niche, in the stream, for example fast-flowing water or calm pools. So as biodiversity increases, each niche is filled by a different species of algae, biomass increases, and more of the overall stream habitat is able to be cleaned.

To find this out, Cardinale set up 150 miniature model streams in small, enclosed plastic flumes to simulate the various environments found in real streams. To each model stream he added one to eight different species of algae commonly found in streams in North America.

He then added nitrate to the systems and measured how quickly it was removed. Cardinale found that as the number of species increased, so did the speed of nitrate removal. On average, the streams with eight species of algae removed the nitrate 4.5 times faster than those with one species.

In a further experiment, Cardinale set up model streams that had only one type of habitat in them. When several species of algae were introduced, one species became dominant and the effect of species diversity on nitrate removal disappeared. This, he says, supports the idea that “niche partitioning” is the mechanism behind biodiversity and improved water quality.

“The primary implication of this paper is that naturally diverse habitats are pretty good at cleaning up the pollutants we dump into the environment, and loss of biodiversity through species extinctions could be compromising the ability of the planet to clean up after us,” Cardinale said in a press release.

“It’s just one study, but it’s part of a growing body of scientific evidence that is now clearly showing that the modern mass extinction of species is going to affect humanity in some big, and important ways,” he added.

Cardinale recently led a team of nine researchers in a larger analysis of biodiversity data collected over the past 20 years, published in a March special edition of the American Journal of Botany.

The meta-analysis looked at the bigger picture of how the loss of plant biodiversity could affect the Earth’s ecosystem.

“Nearly every organism on this planet depends on plants for their survival,” Cardinale commented in a press release. “If species extinction compromises the process by which plants grow, then it degrades one of the key features required to sustain life on Earth.”

The team analyzed the results of 574 field and laboratory studies from five continents that measured changes in productivity. They found that plant communities with a high diversity both on land and in water are almost 1.5 times more productive than single-species communities. They are also more efficient at capturing nutrients and light.

“This summary provides unequivocal evidence that declining diversity of plants and algae in the world’s ecosystems will decrease the biomass of plants in natural ecosystems, and degrade their ability to use biologically essential nutrients from soil and water,” Cardinale said. “Preliminary evidence also suggests that declining diversity may reduce the ability of natural ecosystems to produce oxygen, and to remove carbon dioxide from the atmosphere.”

From their findings, the researchers suggest that a small loss of biodiversity may only have a minimal effect on ecosystems, but once the number of extinctions reaches a “tipping point,” the effect could be quite dramatic.

More research is needed, though, note the researchers.

“We need to translate the insights gained from simple experiments into the ‘real-world,’ where things get considerably more complex,” Cardinale said. “But infusing more reality to experiments will greatly enhance our ability to predict the impacts of extinction.”

Watch a webcast in which Cardinale talks about his research HERE