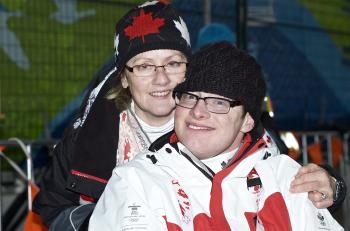 CYPRESS MOUNTAIN, Canada—Alexandre Bilodeau’s historic gold medal in men’s moguls was a huge joy and relief for his family and friends who waited anxiously as he completed his run.

“I am completely out of words, I don’t know what to say,” said his sister Beatrice Bilodeau, 16.

A mogul skier herself, she was a forerunner testing the course before the Olympians went down.

“When I saw him go down and I saw his time I was crying before I even saw the results.”

But when she saw the results it really hit home, she said.

“I was like ‘Calm down, do not cry right now, there is still another [skier] going down.’ And then when I saw [Colas] Guilbaut’s run I was like ‘Yeah!’ I was completely out of words.”

She said even though as a racer she understands the pressures involved and what it feels like to stand at the top of the hill herself, she still gets incredibly nervous before her brother’s big Olympic runs.

For dad Serge Bilodeau, the night marked the culmination of a long journey.

“It’s amazing. It is very difficult to believe, it was a dream for all the family because we always participate in his career,” he said.

“He was the World Champion last year and the only trophy missing was at the Olympics. It’s quite big, and quite difficult and today it is done and we are very very very proud of him. He deserved it, he worked so hard.”

Alexandre gave his older brother Frederic a lot of credit for his win in the press conferences that followed.

He said Frederic, who has cerebral palsy and gets around with the help of a wheelchair, has taught him over the years what it means to be grateful and keep fighting till the end.

“He is a real inspiration for Alex, because in the career of an athlete you have some ups and some downs,” said Serge of Frederic.

“He is a happy camper. He never complains, everyday he is happy in this situation.”

For his part, Frederic said, “Obviously he won, and I am very happy. I am very proud of him.”

Mom, Sylvie Bilodeau, struggled to find the words. Speaking in French with Serge translating, she said, “I am very emotional and that is why the words, even in French, cannot come.”

Alexandre might have been busy making history that day, which just happened to be Valentine’s Day, but he still managed to give his girlfriend Jany-Eve Saucier flowers.

Carrying the bouquet that Alexandre was given during the flower ceremony that followed his gold medal run, she said it was impossible to describe her feelings at that moment.

“It felt so good, he has been working so hard.”

Like Alex’s little sister, she also struggles with nerves.

“I faint. I have palpitations and I am so stressed and so anxious because anything can happen. One tiny mistake and you’re out. It’s pretty exciting.”

Sometimes dating an Olympian can be tough though, she said.

“He wasn’t there for my birthday and he is gone two weeks on the fourth, so it can be hard, but it is worth it, 100 percent worth it.”