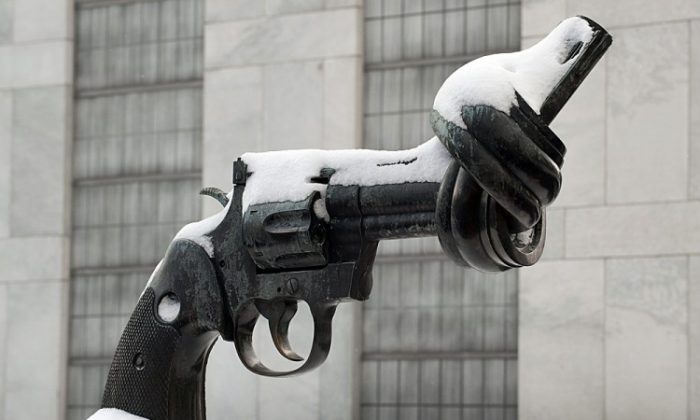 Snow covers a sculpture of a gun with a twisted barrel on the grounds of the United Nations last year in New York. (Don Emmert/AFP/Getty Images)
Social Media

Billy the Kid Photo Turns out to Be Worth Millions

He bought the old photo for $2—but it turns out it’s worth millions.

The value skyrocketed after experts confirmed that one of the figures in the picture, which shows 15 people in front of an old cabin, is the notorious outlaw Billy the Kid.

It’s only the second picture confirmed of the infamous outlaw, whose real name is William Bonney.

The kid is in the middle of a croquet game in New Mexico in the picture, which was taken in 1878. Kagin’s, a company specializing in Western Americana and Rare Coins, recently authenticated the picture.

“The historical importance of a photograph of Billy the Kid alongside known members of his gang and prominent Lincoln County citizens is incalculable. This is perhaps the single most compelling piece of Western Americana that we have ever seen,” Kagin’s owner Donald Kagin said in a statement on the company’s website.

Collector Randy Guijarro told KSEE that buying the picture was a last-minute decision.

“I had just a couple of bucks left, and I found three photographs I liked, and of the three, the oldest tintype, I actually kind of chucked it back in the box,” he told the station.