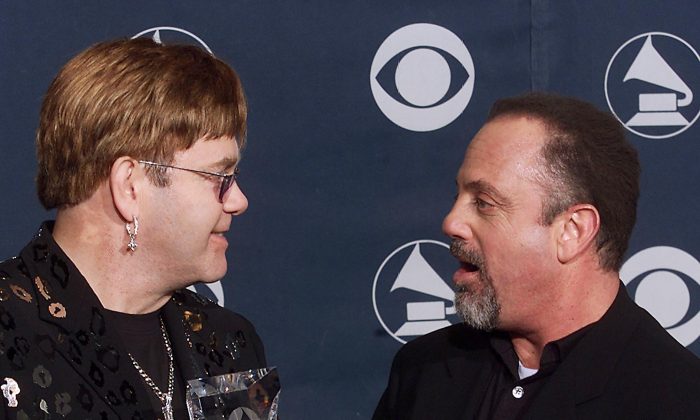 A file photo of Elton John (L), holding a Grammy Legend Award on Feb. 23, 2000, after fellow rock performer Billy Joel (R) presented him with the honor during the 42nd Annual Grammy Awards at the Staples Center in Los Angeles. (Vince Bucci/AFP/Getty Images)
Entertainment

Billy Joel and Elton John made gestures of reconciliation at the Songwriters Hall of Fame awards ceremony in New York City on Thursday after a two-year feud.

John and Joel began working together in 1995, according to Us magazine. After touring together for years, John spoke of Joel’s alcoholism in a 2011 interview with Rolling Stone magazine. Joel told New York Times Magazine in May: “He [John] doesn’t know anything about my private life … He’s a very friendly, charming man, a nice fun guy, but we really never spent much time personally together.”

At the Songwriters Hall of Fame on Thursday, however, both extended well-wishes to each other—and other feuding performers made similar gestures of reconciliation.

John won the Johnny Mercer Award, the night’s top prize. When he accepted the award, he said, “Mr. Joel, I haven’t seen you tonight, but I love you dearly,” according to Us magazine. Joel later introduced Mick Jones and Lou Gramm of Foreigner. At the podium, Joel said, “Is Elton still here, by the way?”

Gramm and Jones also bridged a gap. Jones continued his work with Foreigner led by a new singer after Gramm left the band due to a brain tumor—a move Gramm has openly criticized. When they took the stage together on Thursday, however, Gramm called Jones, “my buddy here,” according to Rolling Stone.

Steven Tyler and Joe Perry of Aerosmith were not quite so conciliatory, but their performance of “Walk This Way” with the house band made “the point about their lasting collaboration,” as Rolling Stone put it.