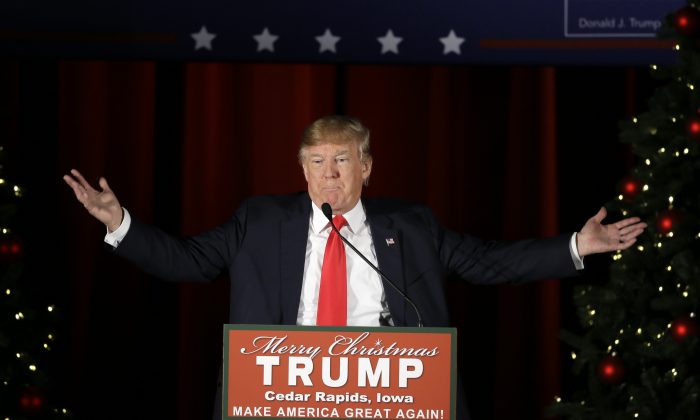 Billionaire Trump to Spend Millions on Ads in GOP Race

COUNCIL BLUFFS, Iowa—Billionaire Republican presidential candidate Donald Trump says he plans to spend at least $2 million a week on television advertising in the first three voting states, a move that would mark a massive departure for a candidate who has so far relied on free media to fuel his insurgent campaign.

Despite Trump’s typically ironclad confidence, he told reporters invited aboard his private jet Tuesday he didn’t want to take anything for granted.

“I don’t think I need to spend anything. And I’m very proud of the fact that I’ve spent the least and achieved the best result,” Trump told reporters before a rally in Council Bluffs, Iowa. “I feel I should spend. And honestly I don’t want to take any chances.”

Trump, who leads in national Republican preference polls, has seen his lead dissolve in leadoff Iowa, where Texas Sen. Ted Cruz is surging on the backing of the state’s robust evangelical conservative voting bloc.

The front-runner has spent nothing on television advertising to date, and just over $300,000 on radio ad time, according to advertising tracker Kantar Media’s CMAG — far less than his rivals. Former Florida Gov. Jeb Bush, for example, has spent more than $40 million and trails Trump and several other candidates.

Trump has teased plans to advertise on television in the past, but ad buys have failed to materialize. While Trump has said he’s willing to spend whatever it takes to win the Republican nomination, he has proven a frugal campaigner, putting very little of his own money on the line.

While Trump likes to claim he’s self-funding his campaign, the vast majority of what he’s spent so far has come from donors across the country sending checks or purchasing merchandise from his website.

“I’ll be spending a minimum of $2 million a week and perhaps substantially more than that,” he told reporters, adding, “If somebody attacks me, I will attack them very much and very hard in terms of ads.”

Trump said he had screened the first two ads and says they touch on immigration, trade and national security policy.

When the real estate mogul announced his candidacy in June, he said he planned to spend $35 million by Jan. 1, 2016. Instead, his reliable tendency for combative language has resulted in a steady stream of media coverage, often stemming from comments made during the five GOP debates or during his notoriously meandering speeches at packed rallies.

Trump first hinted at plans to start spending at a rally Monday evening in New Hampshire and tweeted about his plans Tuesday morning.

Trump also said he believes the thousands who attend his rallies, like the more than 3,000 in Council Bluffs, will ultimately turn out to vote for him. Iowa’s caucuses begin the 2016 voting on Feb. 1, a little more than a month away. He said he has faith in his Iowa team, including Chuck Laudner, who ran former Pennsylvania Sen. Rick Santorum’s winning 2012 caucus campaign.

“I actually think all of those people, and maybe even friends of theirs, I really think they are going to come out,” Trump said.

However, when Trump began his speech with a shout out to Omaha, Nebraska — just across the river from Council Bluffs — the crowd in the MidAmerica Center roared. Seconds later, when he hailed the Iowans attending, a much smaller round of cheers rang out.