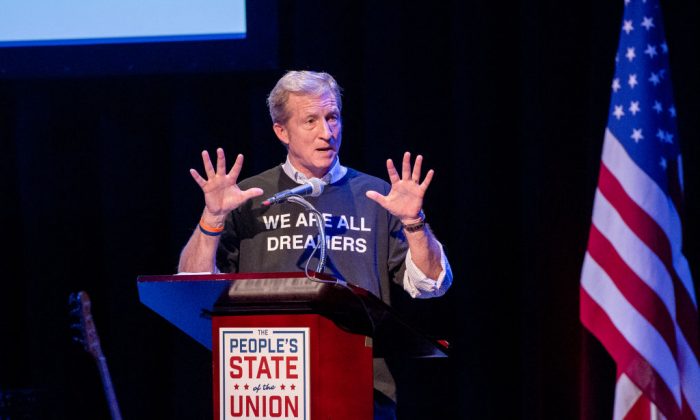 Billionaire investor and liberal activist Tom Steyer reversed course on July 9 and said he would join the crowded field of Democratic 2020 contenders, months after he stated previously that he wouldn’t run for president.

Steyer is one of the loudest voices pushing for President Donald Trump’s impeachment.

His announcement comes almost six months after he traveled to Iowa to declare that he would focus solely on impeachment efforts against Trump, instead of launching a White House run. Iowa is home to the nation’s first presidential caucus.

The 66-year-old from California made no mention of impeachment in his campaign announcement. House Speaker Nancy Pelosi (D-Calif.) has been opposed to such efforts and has warned Democrats that a rush to impeachment could ultimately help Trump politically.

“It’s true. I’m running for president,” Steyer wrote in a Twitter post launching his campaign video. He said his 2020 campaign will focus on reducing the influence of corporations in politics. He also plans to target climate change.

“Americans are deeply disappointed and hurt by the way they’re treated by what they see as the power elite in Washington, D.C., and that goes across party lines and it goes across democracy,” Steyer said in the campaign video. “We’ve got to take the corporate control out of our politics.”

As he seeks the presidency, Steyer is resigning his leadership positions in both NextGen America and Need to Impeach. He says he has committed more than $50 million through 2020 to the two organizations.

Steyer, who joins the race three weeks before the next presidential debates, could struggle to get a spot on the stage. He likely won’t meet polling requirements to participate, but could clear a fundraising threshold.

There are 20 spots at the debate for a field that includes two dozen candidates. If more than 20 people qualify, the Democratic National Committee will hold a tiebreaker to determine who gets on stage.

Steyer’s launch came just a day after Rep. Eric Swalwell exited the Democratic 2020 race on July 8. Swalwell, the first Democratic contender to drop out, struggled to gain traction among the group of candidates.

Trump officially launched his 2020 reelection bid in June, telling a crowd of passionate supporters in Florida that the choice in the upcoming election is between the radical socialism embraced by the Democratic field and his agenda of freedom and the American dream.

The president celebrated the booming economy and cautioned that a vote for any Democrat would erase the progress made since 2017. Echoing some of the campaign promises of the most of the Democratic contenders, he took aim at “Medicare for All,” the socialist health care proposal openly backed by every top Democratic candidate except Joe Biden.

“More than 120 Democrats in Congress have also signed up to support crazy Bernie Sanders’s socialist government takeover of health care,” Trump said. “They want to end Medicare as we know it and terminate the private health insurance of 180 million Americans who love their health insurance.”