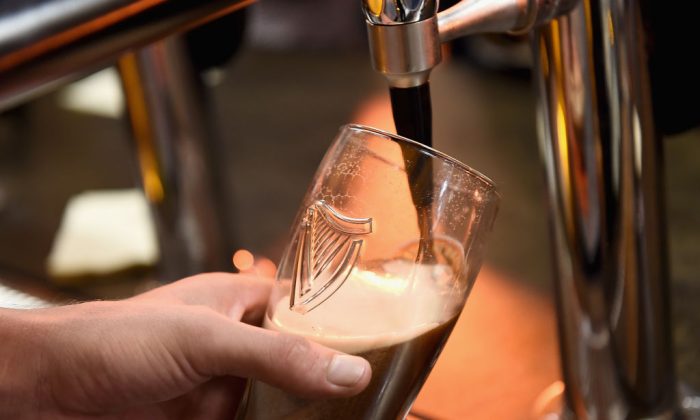 Guinness celebrates 200 years in America at The Root on Oct. 18, 2017, in New York City. (Ilya S. Savenok/Getty Images for Guinness)
US News

Bill Would Lower Drinking Age in State of Wisconsin to 19

A bill currently moving through Wisconsin’s Legislature would lower the legal drinking age to 19—in a bid the authors said will reduce college binge drinking in a state known for its beer-loving reputation.

The authors behind the proposal unveiled on Wednesday, Nov. 8, comes from Republican Reps. Adam Jarchow, Cindi Duchow and Rob Swearingen, who are circulating the bill, CBS affiliate WISC-TV reported. Swearingen is a former president of the Tavern League of Wisconsin, a trade group of alcohol retailers.

Jarchow, the bill’s author, told the network that lowering the age could save “countless hours and hundreds of thousands of dollars” spent enforcing drinking laws among the youth. He also said that they will draft the bill so that it won’t affect federal highway funding.

“I see no reason why we can send young men and women off to war but they can’t have a beer,” Jarchow told WISC-TV.

However according to USA Today, technically, teenagers can already drink at Wisconsin bars and restaurants if a parent is present. One study stated that Wisconsin is the heaviest-drinking state in the union.

Jarchow said that enabling drinking at an earlier age could deflate desires to binge drink.

“The idea is if you prohibit people to doing something until they are 21, the natural inclination is to be a little bit rebellious when they’re young, (and) then to overindulge,” Jarchow told NBC15.

But an organization called Mothers Against Drunk Driving (MAAD) told NBC15 that the bill if passed, it would encourage more alcohol-related accidents.

“We don’t support anything that has any kind of acceptable loss of life,” Doug Scoles, regional director for MADD told NBC15.

According to MADD, studies show that the 21 minimum legal drinking age is safer. Scoles does not think the bill will get much traction.

“MADD’s mission is to eliminate drunk driving, and lowering the minimum drinking age would add to the terrible toll that already plagues our country because of drinking and driving,” Scoles told NBC15.

The mayor of Madison, a city in Wisconsin, said that he is not opposed to the age change as long of there are educational campaigns, better resources for alcoholism and mechanisms for those in the bar/liquor industry to pay more for policing.

“It’s not fair to take it out of the general fund from people living throughout the city who don’t spend a lot of time consuming alcohol in bars,” Mayor Paul Soglin told WISC-TV.