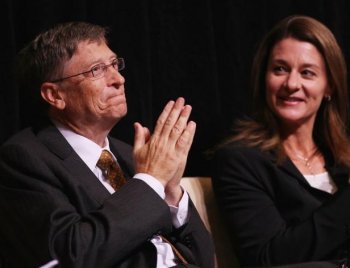 GATES FOUNDATION: Microsoft Corporation Chairman Bill Gates (L) and his wife Melinda attend a ceremony presenting them with the 2010 J. William Fulbright Prize for International Understanding at the Library of Congress in October. The Fulbright Prize recognized the Gates' philanthropic work through the Bill and Melinda Gates Foundation. (Win McNamee/Getty Images)
US

Andrea Hayley
Reporting on the business of food, food tech, and Silicon Alley. Studied the Humanities for undergrad, and obtained a Master of Arts in business journalism from Columbia University. I love covering the people, and the passion, that animates innovation in America. Email me at andrea dot hayley at epochtimes.com
View profile
Follow
biggersmaller
Print
WASHINGTON—During the National Governors Association’s recent winter meetings, Microsoft founder Bill Gates gave a talk on education in America and how reforms and innovation can change the futures of our children, and the destiny of our country.

In the past four decades, the cost of running schools has doubled, while student performance has remained flat. Other developed, as well as some developing countries, meanwhile, have improved and are now outperforming us. This has created a worrying situation for parents, as well as business leaders, who wonder how the nation’s young people will survive in tomorrow's world.

Acknowledging the $125 billion shortfall faced by state budgets this year, as well as the long-term outlook for the economy, Gates’ focused his message to the governors on reforms and changes that could be implemented without increased costs.

“Because we are in an era of trade-offs there are a lot of ideas about what should and should not be done. … It is too bad that education is not something that in the end will be making huge increases again,” Gates acknowledged.

“Now we need to raise performance without spending more.” We need to flip the chart on results, said Gates.

The Bill and Melinda Gates Foundation has made education its primary domestic philanthropic focus. It’s programs support a goal of enabling all students to graduate with the skills and knowledge needed to succeed in college.

Currently, only one-third of students achieve this, and at the nation’s lowest performing schools, up to 70 percent of students are dropping out.

“Are we training people for the jobs of tomorrow?” asks Gates.

The Gates Foundation advocates a quantitative approach to measuring what works, turning positive results into best practices, and spreading them.

Under No Child Left Behind, an act of Congress under George W. Bush, states were allowed to set their own standard benchmarks for student performance. The result was a disparate set of standards, varying from state to state. There has been little ability, outside SAT scores, to measure student progress beyond state lines.

Starting in 2009, the National Governors Association Center for Best Practices (NGA Center) and the Council of Chief State School Officers (CCSSO), in collaboration with a variety of stakeholders, including the American Federation of Teachers (AFT), began work on new Common Core State Standards.

Within one year, the new set of standards, which apply to language, arts, and math in grades K-12, were completed. Fourty-four states have already voluntarily signed onto the program, and eight are currently actively implementing the new methodology.

Supporters hope the new benchmark, which is designed to prepare students for college and workplace success, will help improve the country’s sliding student performance.

“The common core is an amazing piece of work,” said Gates.

A student can take the test, and immediately know where they are. In addition, new math textbooks place emphasis on teaching a few core concepts well, rather than the previous multiplicity of concepts, explained Gates.

Next: Supporting the Best Teachers