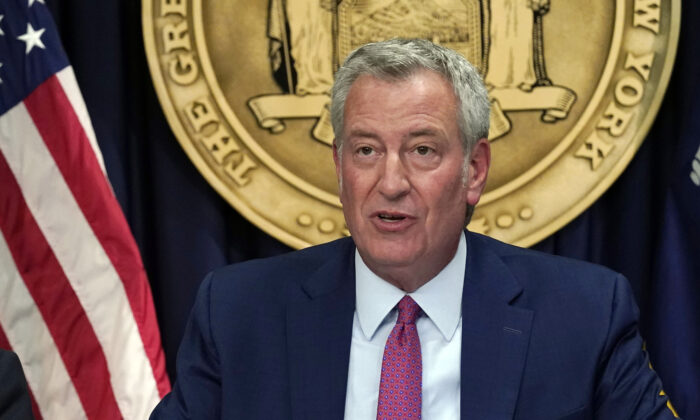 “I am not going to be running for governor of New York state,” the Democrat said in a brief video announcement, “but I am going to devote every fiber of my being to fighting inequality in the state of New York.”

De Blasio served two terms as mayor and was prevented from running for another by city rules. He was succeeded on Jan. 1 by Eric Adams.

While in office, de Blasio, who unsuccessfully sought the 2020 Democratic presidential nomination before bowing out after failing to gain traction, had frequently declined to shoot down rumors he wanted to try to win the gubernatorial race.

“I am going to stay in public service, and I’ll have a lot more to say in the next few weeks, let’s put it that way,” he said on MSNBC last month.

The 2022 gubernatorial race is wide open after former Gov. Andrew Cuomo resigned following an investigation that substantiated claims of sexual harassment and abuse lodged against him by 11 women, including a state trooper.

Kathy Hochul, the lieutenant governor, succeeded Cuomo and is running for a full term.

A slew of other high-profile officials have said they won’t run or have launched a campaign only to withdraw. Among them: New York Attorney General Letitia James and Hillary Clinton, the former secretary of state.

De Blasio would have changed the dynamics of the race. He did not give a reason why he chose not to join it and he did not say what he plans to do in the future, promising to share more updates soon.

In the video, the former mayor promoted his accomplishments in office, including helping enable free pre-kindergarten for every child in the city and upping the number of affordable housing units.

“We proved, together, we can make a big change,” he said.