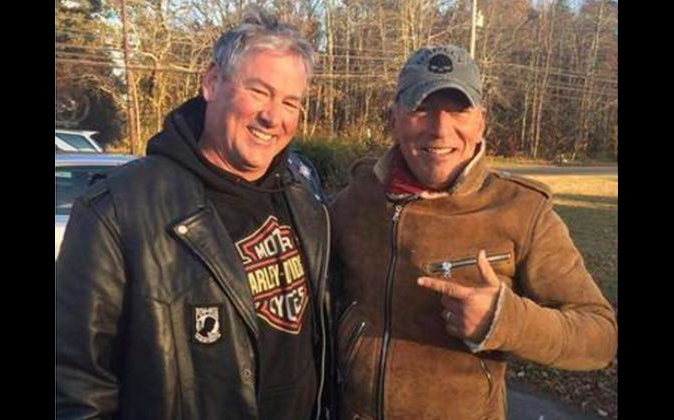 In this Friday, Nov. 11, 2016, photo provided by Ryan Bailey, Dan Barkalow, left, and Bruce Springsteen poses for a photo in Wall Township, N.J. Barkalow and a group from the Freehold American Legion was riding after a Veterans Day event Friday when they pulled over to help a stranded motorcyclist who turned out to be The Boss. (Ryan Bailey via AP)
Politics

Bikers Help Springsteen, Stranded on the Side of the Road

Coming across Bruce Springsteen on a broken down motorcycle on the side of the road could probably be a lyric from one of his songs, but it really happened for a group of bikers from New Jersey.

A group from the Freehold American Legion was riding after a Veterans Day event Friday when Dan Barkalow says he saw a stranded motorcyclist up ahead near Allaire State Park in Wall Township.

“Bikers gotta stick together,” Barkalow said. “I stopped to see if he needed help, and it was Bruce.”

Barkalow says they tried to help get his bike running, but when they couldn’t, Springsteen—wearing a brown riding jacket and a red handkerchief—hopped on the back of one of their bikes and they headed to a local bar.

“We sat there and shot the breeze for a half hour, 45 minutes till his ride showed up,” Barkalow said. “Nice guy, real down to earth. Just talked about motorcycles and his old Freehold days.”

Springsteen was raised in Freehold and still lives in New Jersey. The American Legion post says Springsteen is eligible to join since his father was a veteran.

“It was nice to help out,” Bailey said. “One Freehold person helping out another.”