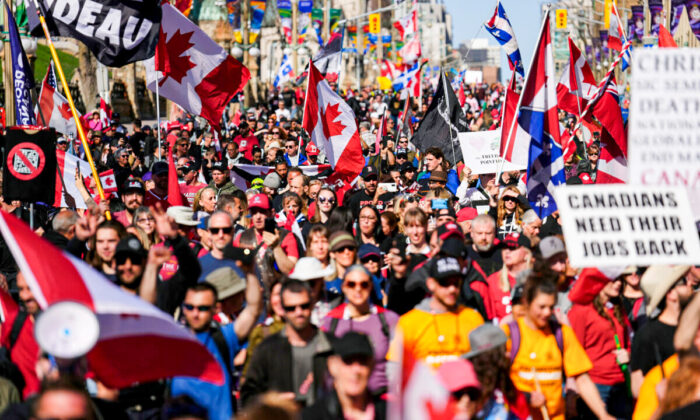 Protesters gather and wave flags during a demonstration in downtown Ottawa on April 30, 2022. (The Canadian Press/Sean Kilpatrick)
Canada

Limin Zhou
Limin Zhou is a reporter based in Ottawa.
View profile
Follow
and Isaac Teo

Earlier on April 30, the bike convoy arrived at the National War Memorial downtown just before noon, where they drove past the area as planned to pay homage to veterans who had sacrificed their lives for the freedom of Canadians.

Matthew, who declined to give his last name, told The Epoch Times that he rode his bike to Ottawa from Sault Ste. Marie, Ont., and plans to go back on Sunday, May 1.

In an interview earlier in the morning at the bikers’ gathering place in the east end of Ottawa, prior to driving downtown, the steelworker said he came to show support for the war veterans who “fought for our freedoms” and to do his part to uphold freedoms.

“These veterans, the men and women, they fought for us. But this government has taken us here,” said Matthew.

“You’ve got to know, if you don’t stand for something, you’ll fall for anything. We’re patriotic, we’re Canadian, and we’re here to offer support.”

Another biker, Barry Deschenes, who is a school bus driver from Gatineau, said he came out to show support for veterans.

“A lot of them don’t get the support they should,” he said in an interview.

Later in the day, a massive crowd gathered on the Hill and surrounding area waving flags and chanting “Freedom.” The crowd started thinning in late afternoon.

Heavy police presence could be seen spread throughout the peaceful crowd.

Police have made several arrests and towed vehicles since the first day of the protest on Friday, April 29.

At around 3 p.m. on Saturday, police said a driver was arrested for dangerous driving and was “identified as someone with bail conditions not to enter Ottawa, stemming from charges received during the February occupation.”

More than 1,000 people were assembled at the War Memorial for a service that began around 10 a.m., organized by Veterans for Freedom (V4F), a group of retired regular force and primary reserve Canadian Armed Forces (CAF) members.

V4F is a partner of the Rolling Thunder Ottawa series of events taking place in the nation’s capital this weekend.

The group’s mission, according it website, is to rally CAF veterans across the country “by mobilizing and sustaining lawful civic action in order to restore the fundamental rights and freedoms of Canadians.”

In his speech at the War Memorial, Rolling Thunder organizer Neil Sheard said that freedom is to be cherished, as losing it means the end of a democracy.

The veterans stood solemnly in silence during the ceremony.

Speaking with The Epoch Times before the ceremony, Dave, a military veteran who served 22 years and who only provided his first name, said he joined the V4F service to reclaim the honour of the War Memorial.

“It should have never been shut down,” xhe said.

Another veteran, who gave his name as Terry, said it was wrong of the government to fence off the War Memorial.

“People need to show up and let them know that’s not right,” he said.

The authorities had erected a fence around the War Memorial after a woman stood on the Tomb of the Unknown Soldier yelling “Freedom!” on the first day of the Freedom Convoy protest on Jan. 29. She could be heard saying a typical French-Canadian curse as she stepped down from the tomb.

Veterans participating in the protest later took down the fencing of their own volition and proceeded to remove the snow and ice around the tomb.

The Ottawa Police Service (OPS) has confirmed that the woman was not associated with the Freedom Convoy truckers.

“She was spoken to, showed remorse for her actions, and police are confident she will not re-offend,” said an email statement from the OPS on April 29.

“The woman is from Québec,” OPS spokesperson Carole Macpherson told Blacklock’s Reporter, adding that “there was no admitted association to the Freedom Convoy truckers.”

Shortly after the ceremony concluded, protesters moved to the Wellington Street area to watch the convoy of motorcycles driving past the area. There was heavy police presence.

The bikers had driven downtown from the east end of Ottawa, where they gathered at the St. Laurent Shopping Centre parking lot earlier in the morning to prepare for the drive to the War Memorial.

According to the Rolling Thunder organizing team, the convoy has about 350 motorbikes participating and planned to dispatch them in groups of 75 bikes, with each group following a police-controlled vehicle for the entire ride.

Police have established an exclusion zone to prevent access by protest vehicles to designated core areas of Ottawa’s downtown. No protest events involving motor vehicles are allowed inside this zone, although the roads are not closed and regular residential and business traffic is permitted.

A route was pre-planned for the motorcycle riders to allow them to ride through the city without any stops. The route allowed them to get close to, but not pass by, Parliament Hill and the National War Memorial, where organized events were scheduled to take place.

The gathering on Parliament Hill was organized by the FFC.

On Friday, April 29, protesters marched on foot around the Parliament area calling for freedoms as bikers arrived in the city to await the April 30 events.

Police made seven arrests and towed 24 vehicles on April 29. Police also broke the windows of at least one truck.

The Rolling Thunder event follows the weeks-long trucker convoy protest that called for the removal of COVID-19 mandates and restrictions in February.

On Sunday, May 1, the Rolling Thunder event is planned to conclude with a Bikers Church Service at 10:30 a.m. at Capital City Bikers Church in Vanier, a neighbourhood a few kilometres east of downtown Ottawa.

Annie Wu, Noé Chartier, and The Canadian Press contributed to this report.