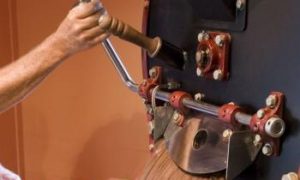 Fairtrade: Putting the Best of Humanity Back into Trade
0 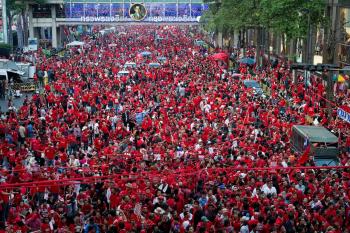 Biggest Red Shirt Anti-Government Rally in Bangkok Since May Crackdown

By James Burke
Print
BANGKOK—Merchandising is alive and well when it comes to anti-government protests in Thailand. Street vendors of red shirted supporters, or the UDD (United Front for Democracy against Dictatorship), were among the first to set up their stalls around Bangkok’s Democracy Monument where a large-scale protest started on Sunday morning.

The vendors were the earliest protesters arriving for 2011’s first large anti-government rally, which finished at the Ratchaprasong intersection—the high-end retail area was occupied by the UDD last April-May in a failed bid to force Thai Prime Minister Abhisit Vejjajiva to dissolve Parliament and call an early election.

Other for sale items, such as aprons and T-shirts, featured exiled former Prime Minister Thaksin Shinawatra who was ousted by a military coup in 2006 and whom the largely rural, working-class red shirts see as their champion. The Thai government now describes the ex-business tycoon as a terrorist.

Prime Minister Abhisit’s government, the red shirts say, came to power unlawfully and was installed by the Thai military and the bureaucratic elite.

Other stalls around Democracy Monument on Sunday were hawking red-shirt propaganda with images of the violent clashes between protesters and soldiers in the Thai capital. Missing were any images of the 30 plus buildings set alight by hard-core red shirts on May 19 following the military’s operation to clear the demonstrators from their fortified camp.

In-between all of the seriousness, other vendors were selling Thai food as red-shirt pop music blared from parked cars for dancing demonstrators who welcomed incoming carloads of red shirts. Other vendors offered foot massages or lottery tickets.

By midafternoon around 10,000 red shirts made their way from Democracy Monument to Ratchaprasong, returning to the area the red shirts occupied last spring.

Bangkok Metropolitan Police reported that 30,000 protesters had gathered at the intersection by evening, according to the Bangkok Post, while a source with the special branch police told the paper the crowds were up to 40,000 strong.

Over a thousand police were on hand to oversee the rally, which was largely peaceful.