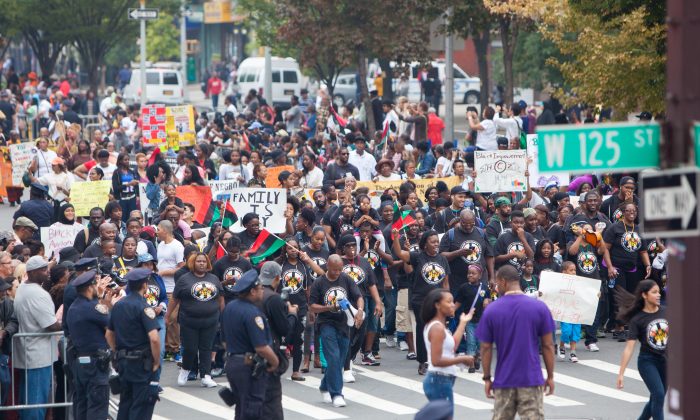 The annual African-American Day Parade in Harlem attests to that, being the largest celebration of the day in the United States.

Spanning from the edge of the Central Park at 110th Street to 136th Street along the Adam Clayton Powell Blvd., the parade encompassed a variety of marching bands, cheerleader squads, city workers, and public officials.

Still, the parade isn’t the same any more, according to locals.

“It used to be really, really big and a lot of people,” said Elizabeth Gomez from Harlem.

“But you don’t see too many people like it used to be,” Gomez said.

That doesn’t mean the event is less significant to her.

“It used to be more interesting,” said Assane Diop. He came from Senegal over 30 years ago and comes to the parade every year, for the past decade with his son Ousseynou.

“It means a lot to me, because this is a black parade,” he said. “I’m proud to see my people here.”

“The neighborhood’s changing though,” Gomez said, referring to creeping gentrification. “It used to be a lot of blacks here,” she said. “I don’t know where they’re going, but they’re not here.”

“This neighborhood has always stood for inclusion of all,” he said.

His plan is to build 200,000 units of affordable housing in the next 10 years. Whether that’s soon enough or enough at all remains to be seen.

“In five more years everything will want to be in Harlem,” Diop said. “Watch and see.”