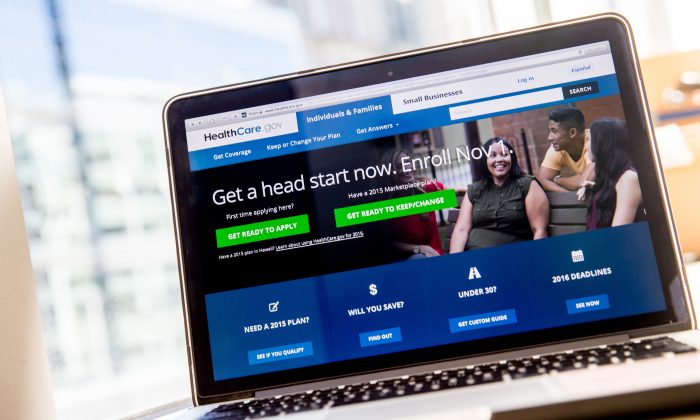 In this Oct. 6, 2015 file photo, the HealthCare.gov website, where people can buy health insurance, is displayed on a laptop screen in Washington. (AP Photo/Andrew Harnik)
US

WASHINGTON—The math is harsh: The federal penalty for having no health insurance is set to jump to $695, and the Obama administration is being urged to highlight that cold fact to help drive its new pitch for health law sign-ups.

That means the 2016 sign-up season starting Nov. 1 could see penalties become a bigger focus to motivate millions of people who have remained eligible for coverage, but uninsured. They’re said to be more skeptical about the value of health insurance.

Until now, health overhaul supporters have stressed the benefits of getting covered: taxpayer subsidies that pay roughly 70 percent of the monthly premium, financial protection against sudden illness or an accident, and access to regular preventive and follow-up medical care.

But in 2016, the penalty for being uninsured will rise to the greater of either — $695 or 2.5 percent of taxable income — for someone who goes without coverage for a full 12 months. This year the comparable numbers are $325 or 2 percent of income. While the increase isn’t good news, it does create a marketing opportunity.

The numbers are pretty clear. With subsidized customers now putting in an average of about $100 a month of their own money, a consumer would be able to get six months or more of coverage for $695, instead of owing that amount to the IRS as a tax penalty. Backers of the law are urging the administration to hammer that home.

“Given that the penalty is larger, it does make sense to bring it up more frequently,” said Ron Pollack, executive director of Families USA, a liberal advocacy group. “It’s an increasing factor in people’s decisions about whether or not to get enrolled.”

“More and more, people are mentioning the sticks as well as the carrots,” said Katherine Hempstead, director of health insurance coverage for the Robert Wood Johnson Foundation, a nonpartisan organization that has helped facilitate the insurance expansion under Obama’s law.

Hempstead says the message about penalties resonates with uninsured people, who are generally cash-strapped low- and middle-income workers.

A lot of people cite it as the main reason for signing up, she said. “It’s the law and they don’t want to pay the penalty.”

Administration officials are looking for a balance.

“We need to be make sure that we are very clear and explicit about that $695 penalty so people understand the choice they are making,” said spokeswoman Lori Lodes. But she said the main emphasis will stay on the benefits of having health insurance and how the law’s subsidies can dramatically lower the cost of monthly premiums.

The requirement that individuals get health insurance or face fines remains the most unpopular part of President Barack Obama’s health care law, a prime target of Republican repeal efforts. It started at $95 or 1 percent of income in 2014. The fact that it’s up to $695 may take consumers by surprise.

But many experts consider the mandate essential to Obama’s overall approach, as does the insurance industry. The law forbids insurers from turning away people with health problems, and the coverage requirement forces healthy people into the insurance pool, helping to keep premiums in check. After 2016, the fines will rise with inflation.

This year was the first time the IRS collected the penalties, deducting them from taxpayers’ refunds for the 2014 tax year in most cases. Some 7.5 million households paid penalties totaling $1.5 billion, an average of $200 apiece, according to preliminary IRS data. Separately, another 12 million households claimed exemptions from the mandate because of financial hardships or other reasons.

Although Obama’s law is five years old and has survived two Supreme Court challenges, administration officials say the upcoming open enrollment season won’t be easy. It may be a struggle to just keep about the same number of people covered.

How Do Justices Weigh Loss of Health Insurance for Millions?

The administration has set a goal of 10 million customers enrolled and paying their premiums by the end of 2016 on HealthCare.gov and state insurance markets. That’s roughly the number covered now, and well below what congressional budget analysts had estimated for 2016. The administration expects most will be returning customers, but 3 million to 4 million will be people who are currently uninsured. There’s a lot of turnover in the market.

Among the difficulties for next year: Premiums are expected to go up more than they did this year, even if taxpayer subsidies cushion the cost. The most eager customers have already signed up. And many of those remaining appear to be stretching tight household budgets, with other financial priorities, like car repairs or putting money in savings accounts.

Sign-up season starts Nov. 1 and runs through Jan. 31. As a result of the law, the share of people in the United States lacking health insurance is at a historic low of about 9 percent, and the White House wants to keep that trend growing during Obama’s last full year in office.