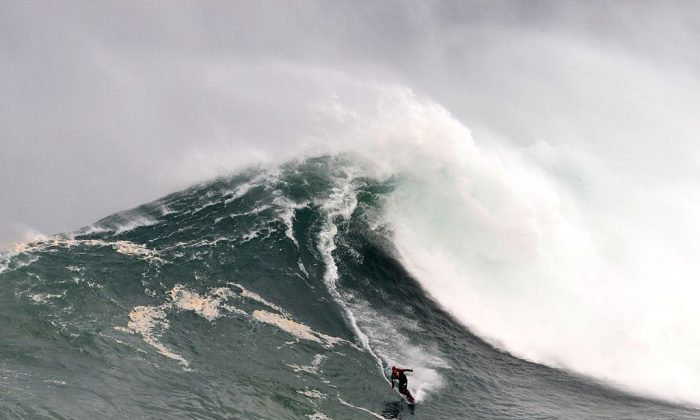 A British surfer was tackling one of the world’s biggest waves when a brutal wipeout broke his back.

Andrew Cotton, 36, is a professional big wave surfer, according to his website. He suffered the worst injury of his career when he traveled to the mountainous seas off Nazare in Portugal—where waves can reach almost 80 feet high, according to The Telegraph.

Cotton was thrown from his board and slammed back-first into the water at a breakneck speed.

The surfer is now recovering in a Portuguese hospital, The Telegraph reported. He is already planning a return to the region after he receives a good prognosis from the doctors.

“What can I say, I got a little excited this morning and ending up having possibly the worst wipe-out impact wise of my life,” Cotton wrote in the description.

“Thank you to all the lifeguards and crew on the beach who helped stabilize me and do a great spinal recovery, I can’t name everyone but you all did your bit to get me safely to the hospital”, he added.

The surfer said that while the incident has left him with a broken back, he has been “really lucky” nothing worse happened and is already looking forward to getting back surfing.

What can I say, I got a little excited this morning and ending up having possibly the worst wipeout impact wise of my life. Thank you to all the lifeguards and crew on the beach who helped stabilise me and do a great spinal recovery, I can’t name everyone but you all did your bit to get me safely to the hospital . Obviously huge shout out to the team: @mcnamara_s for the waves, @hugovau for rescue, company and laughs in the hospital and @polvo32 for the calls on the radio and friendship . I have broken my back but I’ve been really lucky, I’m already looking forward and focusing my energy to get fit and back out there on some more big rollers ! ????? • Footage comes from Wednesday while @go_dids was filming a documentary about @mcnamara_s’s return to big wave surfing, produced by @polikromia

The video has sparked attention on social media. As of writing, it had garnered over 10,215 likes in just one day. Many Instagram users wished him a speedy recovery.

Cotton’s wife, Katie, 41, was also in Portugal with him and their two children. However, they returned to their home in North Devon, England, last week, The Telegraph reported.

Katie told The Telegraph that she had sleepless nights after her husband’s injury. But she knows he is still looking forward to getting back in the water.

Katie said that the injury would probably be the “worst thing that could happen to most people” but she said for her husband it’s just part of what he does, adding that he trains intensely for his career.

The incident was captured on camera by a crew who were filming a documentary about another surfer’s return to big wave surfing, according to Cotton’s video description.

According to The Telegraph, the former plumber and lifeguard said he had “always dreamed of being a big wave surfer.”

Cotton is credited for having surfed the world’s biggest wave at Praia do Norte near Nazare.