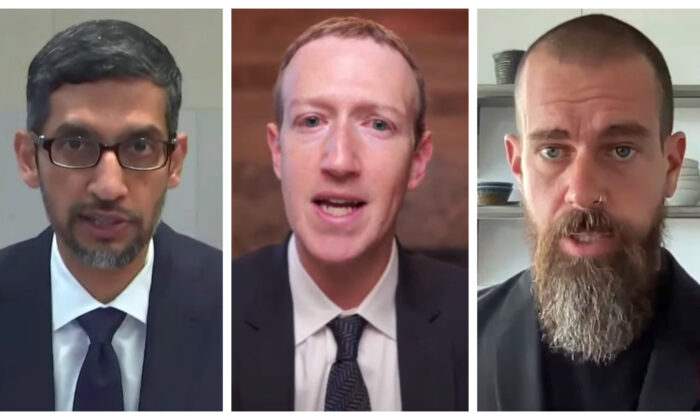 Big Tech companies such as Facebook and Twitter are monopolies that need to be reined in to curb the amount of censorship they’re engaging in, constitutional lawyer Craig Parshall told The Epoch Times.

Section 230 shields technology companies from most lawsuits, with few exceptions.

“That gift was to incentivize competition. What it’s done is it’s grown a series, a handful of giants—I’d say it’s Facebook, Google, Twitter, Apple, and Amazon—five companies that basically rule the landscape in terms of digital information, viewpoint, and opinions, everything from politics, to religion, to culture, arts, and entertainment,” Parshall said on The Epoch Times’ show “Crossroads.”

In recent years, there’s an increasing amount of evidence that the Big Tech companies disproportionately target conservatives, shutting down or limiting certain viewpoints on topics including COVID-19, Christianity, and transgenderism.

The market dominance of Big Tech, which lacks serious competition, makes the censorship all the more concerning, Parshall said.

“When the New York Post was censored, and I use that word censored because Facebook and Twitter are monopolies. And because they’re information monopolies—that’s even worse than a monopoly that’s, let’s say, a monopoly over automobiles or designer clothes or furniture. Rather, monopolies over the flow of information, which is essential to a constitutional republic, then that’s a critical issue. So the market dominance issue is the important one,” he said.

“If we had a thousand Facebooks, that wouldn’t be a problem. Because if 10 of them decided they were going to not carry the New York Post article during the election that had implications for Joseph Biden because of Hunter Biden, his son, it would not be the restriction of the free flow of diversity of opinion. But when you have five companies that basically rule the vast majority of digital landscape on all these issues, then you have a market dominance issue, antitrust problems, and you have a suppression, as the Supreme Court said, just as dangerous as if the government were the one doing it.”

Twitter CEO Jack Dorsey has said the censorship of the Post article, about the contents of a computer that’s believed to have belonged to Hunter Biden, was a mistake. Facebook also limited the spread of the article before the 2020 election.

Congress members on both sides of the aisle are looking to alter existing laws or craft new ones to govern Big Tech, which largely opposes antitrust measures and other efforts to limit its power. But even 10 years ago, when the current market dominance was seen in its early form, no one among various experts could agree on how to deal with it, according to Parshall.

Democrats have urged Big Tech to ramp up content moderation even more, while Republicans have decried the censorship, with some maligning the companies’ monopolistic power.

Solutions include removing some areas from the Section 230 shield, Parshall said, such as how human trafficking is already an exception.

“But then we get to free speech issues about viewpoint suppression. I think the best way to handle this in terms of a regulatory or statutory remedy is to say if you’re a market-dominant player, and define those terms adequately, that a market-dominant digital company then has to follow the principles and precepts of First Amendment jurisprudence that the Supreme Court’s carved out for decades, with certain adaptation to the fact that we’re talking about cyberspace and we’re not talking about a public park,” he said.

“So there’s certain kinds of accommodation that has to be made to the reality of computer engineering that you wouldn’t have in terms of a guy’s decision to pass out leaflets on a public sidewalk. But with those accommodations in mind, I believe in taking the First Amendment and making it otherwise applicable even though it isn’t applicable to state actors, having a federal law saying it will be applied to these giant monopolies unless they have adequate and reasonable content moderation processes that show they’re doing it for themselves.”