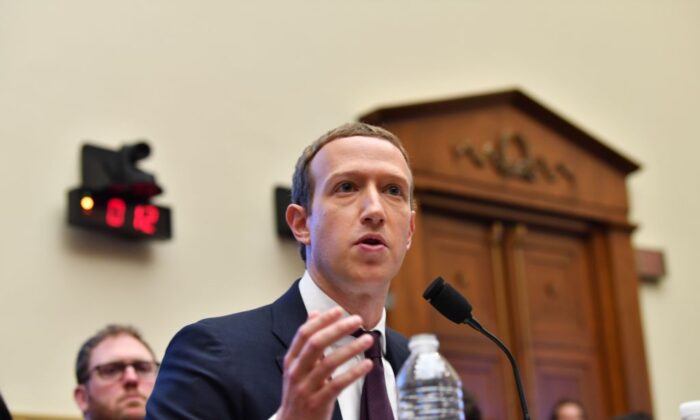 Facebook Chairman and CEO Mark Zuckerberg testifies before the House Financial Services Committee on "An Examination of Facebook and Its Impact on the Financial Services and Housing Sectors" in the Rayburn House Office Building in Washington, DC on October 23, 2019. (Photo by Nicholas Kamm / AFP) (Photo by NICHOLAS KAMM/AFP via Getty Images)
Media & Big Tech

The  Senate Judiciary Committee on Jan. 20 voted 16–6 to advance legislation that would bar tech giants such as Amazon.com from giving preferential treatment on platforms they own to their products and services, in defiance of powerful Silicon Valley lobbyists and pleas from top executives such as Apple CEO Tim Cook.

The American Innovation and Choice Online Act passed the committee with bipartisan support and will now go to the Senate floor to face a vote.

It’s an amended version of legislation cosponsored by Sens. Amy Klobuchar (D-Minn.) and Chuck Grassley (R-Iowa), which was expanded to include popular apps such as TikTok and specified that app companies may not share data with firms that the U.S. government considers to be national security risks.

“As dominant digital platforms—some of the biggest companies our world has ever seen—increasingly give preference to their own products and services, we must put policies in place to ensure small businesses and entrepreneurs still have the opportunity to succeed in the digital marketplace,” Klobuchar said in a statement.

In November, the EU’s top court denied an appeal from Google to overturn a $2.8 billion antitrust fine it received for favoring its own shopping service in search results over competitors.

Big tech has been under pressure in Congress for years over allegations that they have abused their monopoly over the internet. While many bills in the past have been put forward to rein the tech firms in, none have yet become law.

Sen. Ted Cruz (R-Texas), who voted for the measure, said at the hearing that he spoke with Cook, who “expressed significant concerns about the bill.”

Klobuchar said that she also had spoken with both Cook and Google CEO Sundar Pichai.

“I had discussions with them and I made my case and I listened to them. They are most likely never going to like this bill,” Klobuchar said, who added that while she is open to changes, the Senate panel was “not going to put a bill forward that does nothing.”

Another proposal, which was held over, would bar companies such as Amazon or Apple from requiring third-party app providers to only use their in-house payment systems. It also prohibits the Big Tech companies from penalizing apps that attempt to offer different prices through alternative app stores or payment systems.

Amazon, Meta, Google, and Apple officials deny that the companies abuse their dominant market positions. They claim that government intervention in the market through legislation would hurt consumers and small businesses that rely on their platforms.

The Senate bill includes measures “that hamper our ability to offer security by default on our platforms, exposing people to phishing attacks, malware and spammy content,” Kent Walker, president of global affairs and chief legal officer at Google and its parent Alphabet, said in a blog post.

“And it still includes provisions that could prevent us from providing consumers and businesses useful, free services.”

In a letter to the Senate Judiciary Committee obtained by The Associated Press, Apple said that the separate bill on third-party apps would cause “real harm” to “American consumers’ privacy and security.”

“These bills will reward those who have been irresponsible with users’ data and empower bad actors who would target consumers with malware, ransomware, and scams,” Apple said.

Versions of the two bills are sitting in the House of Representatives.