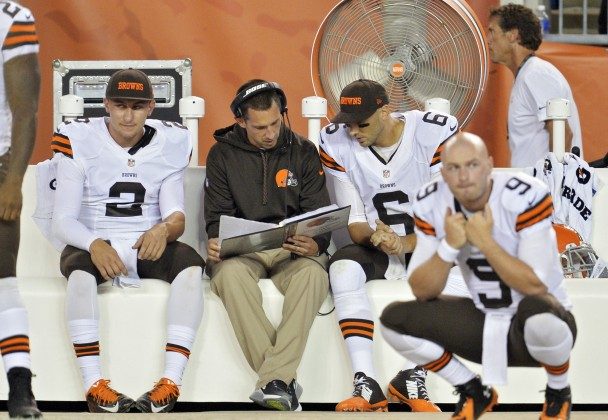 FILE - In this Aug. 23, 2014, file photo, Cleveland Browns quarterbacks Johnny Manziel (2) listens in as offensive coordinator Kyle Shanahan, center, talks with Brian Hoyer (6) on the sidelines in the fourth quarter of a preseason NFL football game against the St. Louis Rams in Cleveland. Manziel doesn't view himself as the Browns' savior, but almost everyone else does. The dynamic rookie quarterback will begin the season as Cleveland's second-string quarterback, but it may not be long before he's moved ahead of Hoyer, who already seems to be looking over his shoulder. (AP Photo/David Richard, File)
News

These are not your same old Browns.

First-time head coach Mike Pettine vowed when given the Cleveland job last winter that the Browns would not, under him, revert to the losing ways that have haunted the franchise for over a decade. While Sunday’s performance was largely ugly, the Browns did not roll over when facing a future Hall of Fame quarterback who was one big play away from notching a win. Cleveland clawed and scratched and then got a bit lucky in the waning moments of play.

That team and the city could use a change of fortune.

No Josh Gordon. No Jordan Cameron. No Johnny Manziel outside of a few plays.

The rally began with the biggest defensive play the Browns have had since 2007. Karlos Dansby, who finished the day with 12 tackles (8 solo), broke past the New Orleans offensive line on that previously mentioned vital third down play. Dansby then brought Brees to the ground before the quarterback could get rid of the football, pushing the Saints back seven yards and out of field goal range. Rather than facing a four- or even eight-point deficit, the Cleveland offense received possession of the ball needing only to get inside of the New Orleans 30-yard line in roughly three minutes.

Quarterback Brian Hoyer was a mixed bag, and his stats reflect it. Hoyer completed 24 of 40 pass attempts for 204 yards and a touchdown. He missed open receivers multiple times, including during the final drive of the afternoon that began on the Cleveland four-yard line.

Hoyer hit when it mattered most.

The Cleveland No. 1 quarterback found Gary Barnidge on a fourth-and-six play that could have seen Hoyer demoted in favor of the phenom known as Johnny Football next week had that pass not been completed. Hoyer then connected with Miles Austin with a perfectly-placed sideline pass that earned the Browns a first down and also stopped the clock with 15 seconds remaining. The hometown hero’s final play of the day turned into a gift from the Saints, as blown coverage resulted in Andrew Hawkins being left wide open for a 28-yard completion.

Billy Cundiff buried the chip-shot 29-yard field goal, the Browns stopped the Saints on the ensuing kickoff return, and Cleveland went to 1-1 on the 2014 NFL regular season.

Just as important as the big plays made by the Browns were the traits the team established in the first win of the Pettine era. The duo of rookie running backs Terrance West and Isaiah Crowell picked up 122 yards on the ground. What has been widely regarded as one of the worst wide-receiving units in the NFL showed that it is able to produce without tight end Jordan Cameron healthy and on the field. Hoyer remained calm and poised with the game on the line.

The Browns are now at .500; as are three other teams in the AFC North.

Following last Sunday’s loss at the Pittsburgh Steelers, a game also decided by a last-second field goal, Pettine told reporters that the NFL is a “pass and fail” league, and that the Browns had, in losing to Pittsburgh, failed. Pettine and his team deservedly get an “A” for Week 2. The 2014 Browns are unbeaten at home, they split games against Pittsburgh and New Orleans, and Hoyer has cemented himself as the current Cleveland starting quarterback.